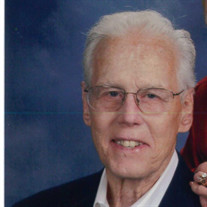 He was born Leland Newton Huff on March 18, 1932, in Inkster, Michigan. His parents were Glenn and Florence Huff, and they had 6 other children, so it was always a busy household. His dad worked for the Ford Motor Company, and his mom worked concessions at Tiger Stadium a few blocks from their home. Leland was a typical little boy, and broke his left arm when he fell out of a tree when he was 9 years old. While the cast was on, he switched to writing with his right hand, and never went back to being a "south paw" again. He enjoyed his siblings and always spoke fondly of his dogs, Tippy and Sport. In high school, he played football, ran track, and worked part-time for the Coca Cola Company for extra spending money - especially when he began dating Mary Lear, who would one day become his wife of 65 years. On their first date, he invited Mary to his sister Gloria's wedding, and afterward, ended up pushing the stalled car they were riding in while wearing his tuxedo! Leland graduated from Western High School in Detroit, and was voted “Best Dressed" of his senior class. Shortly thereafter, Leland entered the Army to serve in the Korean War. He was pulled off of a plane set to go to the front lines because his superiors liked that he didn't smoke, drink or curse, and those attributes perhaps saved his life. He was assigned to the base at Hokkaido, Japan as a part of the Military Police - a title of which he was always so proud. After serving for 2 years, he returned home to marry his sweetheart, Mary Sue, at Temple Baptist Church in Detroit, on June 11, 1954. He started college on the G.I. Bill that fall, majoring in education at Wayne State University where he also earned a Masters Degree in Special Education, and a Masters in Industrial Education. After gaining some teaching experience, Lee and Mary decided to move to California for better weather. They landed in San Bernardino, and Leland started an illustrious 41-year career. He primarily taught woodshop, but filled in on other subjects when needed, as well as teaching evening adult education classes. His students loved him and his jokes (which they called "Huff Duds”), and decades later, approached him in restaurants, stores, and even at the Grand Canyon to tell him how much they appreciated him and how he encouraged them to make all that they could of their lives. When Lori and Craig were both pre-teens, he took them to his summer school classes so they could learn how to work with wood, metal and plastic, as well as drafting. Leland was a master at his craft and also did small watercolor paintings. He was often called on to help Lori and Craig with school projects, and in later years, helped grandson Jared build a perfectly weighted Pinewood Derby car for racing at Cub Scout competitions. Leland accepted Jesus as his Savior and Lord in April, 1942, and was very active in church -- helping small ones get started, and tithing even above that which was asked. He was a constant on Wednesday night Visitation, and was thrilled to lead people to Christ in their own homes. Over the years, he served as a Deacon, an Usher, a junior church instructor, youth group chaperone, and enjoyed singing baritone for many years in the church choir. Craig got his love of fishing and camping from his Dad, and the family's favorite place to visit for summer vacations was the Kern River. There was also horseback riding, tandem bicycles, and river rafting many years ago, and special memories were made. So, it was fortunate that Lori was able to take both parents to stay at the Falling Waters Lodge in Kernville one last time in late 2018. Leland always enjoyed coming to Craig and Lisa's house for family holiday gatherings, and particularly liked sampling Lisa's baked goods. He was a proud Grandpa the day the twins Ashley and Jared were born, and stuck around all day just to look at them. And of course, he was happy that the Huff name would continue on! They called him Papa, and he was so thrilled when they accepted Christ and have now become responsible, loving, kind young adults. When he was 48 years old, he lost his home in the Panorama Fire, and all that he had worked so hard to attain. When he was 65 he was diagnosed with cancer, but after surgery, went on to live another 24 years. At age 88, he lost his sweetheart Mary but took comfort in the fact that he would see her again one day where there is no more pain or suffering. At age 89 that became a reality. Leland went to meet his Savior and the loved ones who had gone before him on May 7, 2021, and is once again singing with the choir.

He was born Leland Newton Huff on March 18, 1932, in Inkster, Michigan. His parents were Glenn and Florence Huff, and they had 6 other children, so it was always a busy household. His dad worked for the Ford Motor Company, and his mom worked concessions... View Obituary & Service Information

The family of Leland Newton Huff created this Life Tributes page to make it easy to share your memories.

Send flowers to the Huff family.