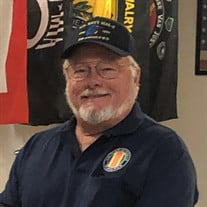 William Alan Summers, long-time resident of Montclair, CA and Highland, CA for the last 15 years, was called home by his Heavenly Father on November 19, 2021. Bill, as he was known to most, was a veteran of the Vietnam War and was en route to a fellow Vietnam Veteran’s funeral service to join as a Patriot Guard Rider when he was involved in a motorcycle accident and succumbed to his injuries. Bill was born September 20, 1948 to William and Irene Summers, attended St Joseph’s Catholic Elementary School and Upland High School (Class of ’66) before enlisting in the United States Navy (“USN”). As an Aviation Technician 3 (AT3) for the USN, Bill was a member of the distinguished Seawolves helicopter gunship squadron, an all-volunteer group formed in support of Naval Special Warfare operations and Mobile Riverine Forces during the Vietnam War. The Seawolves are the most decorated aviation squadron in USN history and the only Navy squadron ever "organized" and "disbanded" in a foreign country. Though it took several years before Bill would talk about his time in the USN, including the total of two and a half years he spent in Vietnam, he was proud to serve his Country and jumped at the opportunity to educate others about his experiences and the Seawolves, and encouraged everyone to watch the “Scramble the Seawolves” documentary, which was released in September 2018. Bill is survived by his wife, Susanna (Suzi), and they had just celebrated their 49th wedding anniversary in March 2021. Bill was strong in his faith and regularly served the communities he has lived. Despite working long hours and many graveyard shifts to put his children through private elementary and high schools, Bill always found time to attend all of his children’s school functions, award ceremonies, sporting activities and even coached his sons baseball and football teams. Bill had many technical skills and talents including his skillful woodworking abilities which can still be seen in local restaurants and homes today. With his wife, he volunteered in the NICU at Pomona Valley Hospital Medical Center, regularly donated blood and platelets, and in many years delivering toys to orphanages during the holidays. He did this in true style by dressing up like Santa Claus, with his trusted “Elf” (Suzi) carrying a bag full of gifts while riding down the highway on their motorcycle. He enjoyed numerous trips on his motorcycle with his wife and riding with friends, including the over 5,000 mile roundtrip “Run for the Wall” in 2019. In addition to his love for his wife and their many adventures, Bill enjoyed attending his grandkids sporting events, camping, tailgating, deep sea fishing and lobstering, and simply spending his time listening to music, barbecuing, having a glass of wine and talking about his family. Bill worked many years in the plastics and injection molding industry and most recently retired from Plascor, Inc located in Riverside, CA in 2018. After his retirement, Bill became very involved with the Vietnam Veterans of America and within the Seawolves Association, serving as Vice President – Membership Coordinator and just recently being appointed President in October 2021. Bill is further survived by his five children: Sheri Shimko - husband Martin, children Ericka Butler (husband Ben), Alexis and Carissa; William Michael (Billy) - wife Antoinette, children Paige, Evangelina, William Philip (Billy), and Joseph; Brian - wife Kimberly, children Jacob, Joshua, and Jenna; Robert - wife Claire, children Ryan, Alyssa, and Cameron; and Brent - wife Michelle, children Charlotte and Zachary; his mother Irene Summers of Poulsbo, WA; his brother Danny of Lynwood, WA; and his sister Renee of Poulsbo WA. He was predeceased by his father, William James Summers. In total, Bill had 16 grandchildren and 4 great grandchildren. Bill will be remembered for his unwavering love for his family, his dedication to his Country and proud service in the USN, and the legacy that he leaves with his children. Services are scheduled as follows: Tuesday, January 25th at 6pm - Rosary at Bobbitt Memorial Chapel located at 1299 E Highland Avenue San Bernardino, CA. Wednesday, January 26th at 10am – Funeral Mass at St Anthony’s Catholic Church located at 2110 N San Antonio Avenue, Upland, CA. Military Committal Honors at the Riverside National Cemetery in Riverside, CA following the Mass at 1:45pm. To reach the family or for additional information, please email [email protected] Or contact Bobbitt Memorial Chapel at (909) 882-3761.

William Alan Summers, long-time resident of Montclair, CA and Highland, CA for the last 15 years, was called home by his Heavenly Father on November 19, 2021. Bill, as he was known to most, was a veteran of the Vietnam War and was en route... View Obituary & Service Information

The family of Mr. William "Bill" Summers created this Life Tributes page to make it easy to share your memories.

Send flowers to the Summers family.