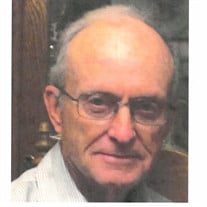 Mid-afternoon on Christmas Day, December 25, 2015, William John (“Bill”) Courtney went home to be with the Lord. Bill passed away unexpectedly while recovering from surgery at Redlands Community Hospital; he was 82 years old. William John Courtney was the youngest of the three children born to Alvin Paul Courtney and Isabelle Gwendolyn Grant Courtney. He was born October 13, 1933, in Minot, ND, and named after his grandfather, William John Courtney, of Page, ND. He spent his early years in Garrison, North Dakota, and later moved with his family to Huntington Park, California. After graduating from high school he attended California Polytechnic State University in San Luis Obispo, California, majoring in animal husbandry. During his third year of college, he was drafted by the United States Army and served during the post-Korean War era as a medic in a MASH unit. He received a medal for Good Conduct and was later honorably discharged from the service in 1956, holding the rank of Sergeant. After returning to civilian life, Bill completed a Bachelor of Science degree at Fresno State University in 1956. Bill was a third generation professional educator. He taught in elementary schools in both California and North Dakota. He developed a special interest and talent working with special needs students at the Anne Carlson School in Jamestown, ND. He was well loved by many students whom he kept in contact with for years. He finished his teaching career working for the San Bernardino County school district in the special education department at Fontana, California. After retiring from teaching Bill, with his wife Ethel, volunteered for five additional years with Habitat for Humanity. He spent his final years playing with several music groups, traveling to visit family in Texas and North Dakota, working on various wood working projects as well as attending Church and Sunday School Classes at Immanuel Baptist Church in Highland. He was known to his family as a health and exercise promoter. He followed a strict plant based diet and was an avid walker despite suffering from severe heart disease. Bill Courtney was married to Ethel F. Radach on June 7, 1959, in Shafter, California. They enjoyed 56 years of marriage. They were actively involved together in the local church and raised their family in the Christian tradition. Bill was a constant reader and lifelong learner, and had a particular fondness for peanut butter. He is also known to have the Irish gift of the gab and could strike up a long conversation with anyone. His personal special interest was his love for music. Throughout his life he play with several music groups. He played several instruments including acoustic guitar, violin, mandolin and banjo. He loved Irish music. He was never typically “old” and one of the favorite family memories was when he went jet skiing at his granddaughter’s graduation party at the age of 80. He was actively involved in his hobbies up until the time of his death. He was deeply loved and will be missed greatly. He was proceeded in death by his parents, Alvin P. Courtney and Isabelle G. Grant Courtney as well as his sisters; Betty Lou Courtney Rayna and Jacquelyn Anne Courtney Erickson. He is survived by his wife of 56 years: Ethel Radach Courtney of Highland, CA, and his daughters: Lisa Christine Courtney Hagen of Seguin, Texas, and husband, Dean E. Hagen, Laurie Colleen Courtney Weir of Ladera Ranch, CA, and husband Ronald Weir, and Cathleen Courtney Ferose of Round Rock, TX. Grandchildren: Ariel Christine Hagen, Anika Tatiana Hagen (adopted from Russia), Aleksei Dean Hagen (adopted from Russia), Alia Krystal Hagen and husband Joseph Scott Hagen, Andrew Lewis Hagen (whom has Down’s syndrome), Zachary Jordan Ferose, Julia Michelle Ferose, Michael Courtney Ferose, Katherine Elizabeth Weir, and Brendan James Weir, and one great-granddaughter, AnaBelle Tatiana Hagen, as well as numerous nieces and nephews. His celebration of life service will be on Tuesday, December 29th, at Immanuel Baptist Church, with a reception following. William John Courtney will have a military burial at the Riverside National Cemetery. In lieu of flowers, the family requests that any donations be made to Immanuel Baptist Church’s mission program.

The family of Mr. William 'Bill' John Courtney created this Life Tributes page to make it easy to share your memories.

Send flowers to the Courtney family.