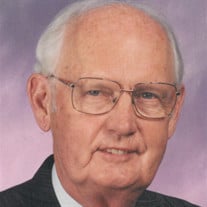 Wendal ‘Lee’ Busboom died on February 26, 2017, at the age of 92. Lee was born to William Roswell Busboom and Mayme (Theeson) Busboom on July 26, 1924. Lee is survived by his wife of sixty four years, Nina Busboom (married April 19, 1952), a daughter, Jacquelyn Lee Mullen and her husband Richard, or Mesa AX and a son Randy Busboom of Riverside, California. Also surviving him are four grandchildren and four great-grandchildren, a sister in law, Betty McKnight of Calabasas, CA and several nieces, nephews and cousins. He was preceded in death by his parents. He attended grades 1-8 in a one room schoolhouse, graduating in 1937. He then graduated for Glenvil Highland School in 1941. He completed two years at Hastings College before enlisting in the Army Air Cop in 1943. He entered World War 11 in 1943 and completed the Aviation Cadet Program as a 2nd Lieutenant in 1945. He was en-route as a crew replacement as a Radar Navigator on B-29s, when the Atomic Bomb was dropped on Japan. He was released from active duty in March 1946 by the Army Air Corps. Graduating from the University of Nebraska in June 1948, he went to work for the Timberlock Corporation in Hastings, Nebraska. In March 1951, Lee was recalled to active duty by the U. S. Air force and was subsequently assigned as a Navigation Instructor. He was selected to attend the George Washington University Advanced Management Class of 1963. While there he completed his requirements for a Master’s Degree in Business. After several interesting assignments and several thousand hours of Air Crew duty as a Navigator on transport aircraft, he arrived at Norton Air Force Base with a different mission; from flying to a desk assignment. His last assignment was at Norton Air Force Base with the Air University as Commandant of the Air Force Reserve training program of the ten Western States. Lee retired as a Colonel in December 1977. Lee was always ready to donate time to significant endeavors. He was continually involved with Scouting activities at all levels and both baseball and football Little League. He spent ten years with the Service Corps of Retired Executives. He was a member of Hastings Masonic Lodge #50 at Hastings, NE for 60 years, the San Bernardino Lodge #175 San Bernardino for 70 years (Life Member) and San Bernardino Elks Lodge 836. He was also a member of the Shrine Club of San Bernardino for over 50 years. A visitation will be held on Wednesday, March 8, 2017 from 5-7:00 p.m. at Bobbitt Memorial Chapel, 1299 E. Highland Ave. San Bernardino, CA 92404. A church service will be held on Thursday, March 9, 2017 at 10:30 a.m. at Lutheran Church of our Savior, 5050 North Sierra Way, San Bernardino, CA followed by a committal service with full Military Honors at Riverside National Cemetery, 22495 Van Buren Blvd, Riverside, CA 92518. In lieu of flowers, donations can be made in Lee’s honor to Lutheran Church of our Savior or The Shriner’s Hospital for Children at 3160 Geneva Street, Los Angeles, CA.

The family of Col. Wendal "Lee" Busboom created this Life Tributes page to make it easy to share your memories.

Send flowers to the Busboom family.