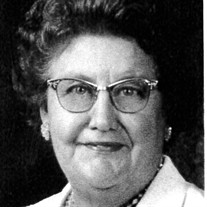 Let me tell you the story of Vivian Irmscher. It won’t be quite like she would have told it, because she would make sure you noted everyone’s first AND last names and heard at least something about who their parents or children are. But first, let’s walk up to her back door, latch the gate so the dog doesn’t get out, and head into the kitchen. You’d better be hungry, because she was a true mid-westerner: if you were at her house you MUST be hungry and in need of a good cup of coffee. If she didn’t have your favorite on hand, just give her a minute and she’d whip something up. Tell her that you just ate, and she would give you a puzzled look and offer something else because surely there was something she could feed you. No story about Vivian Irmscher would be complete without talking about her faith. Throughout Vivian’s early years, Meta Berg instilled her love of God in her daughter. Vivian was confirmed in the Lutheran church in her early teens, and it played a large role the rest of her life. She constantly strove to help her fellow man, spreading love and the word of God until the day she died. Vivian Evelyn Irmscher was born August 24, 1921 in Buffalo, ND. Her parents Arthur and Meta (Richman) Berg had married in 1918, shortly before Arthur left for WWI. Her brother, Harold, was 1 ½ years older, and baby sister Arline didn’t come along for another five years. She graduated high school in 1939 as salutatorian and was awarded two scholarships, though finances prevented her from accepting either of them. That same year she met Ted Irmscher, who would become the love of her life. Before long, they were a couple, and became engaged Christmas of 1941. Ted was soon drafted into WWII and they married on St. Patrick’s Day, 1942, three days before he had to report for duty. Because Vivian was still attending Dakota Business College in Fargo, they didn’t publicly announce their marriage until she graduated that August. Vivian and Ted longed for children. Son David joined the family in 1952 and was the light of his mother’s life. Grandson Matthew came along September of 1976, to the delight of both Vivian and Ted. Finally, Annika joined the family in 2002, when she and Matt married. Vivian’s love of music began early, in elementary school she started piano lessons. She continued playing piano the rest of her life. In her later years she became a true champion of music and the arts. She worked for both San Bernardino Valley Community Concert Association and Arrowhead Allied Arts Council for almost 40 years, finally retiring in 1993. Vivian was widely recognized for her work and influence in this area. The 50th anniversary program of the San Bernardino Valley Concert Association ran a special tribute to her. The tribute begins “Vivian Irmscher is one of the great unsung heroines of San Bernardino” and ends “Her obsequious manner belies a firm and positive grasp of her position of leadership in the San Bernardino Valley Concert Association. The association owes her a great deal.” Vivian first moved to San Bernardino in August of 1943, when Ted was completing training in California. Though she left after about a year, to care for her mother, who was ill in Portland, she would return after the war to make her home. When they returned in 1946, Vivian resumed her job at the Sun Newspaper. She and Ted attended First English Lutheran Church until its closure in 1992. Vivian devoted her time to many organizations, including P.E.O., Women’s Club, and Mary’s Table to name just a few. Vivian and her husband Ted, who passed away in March 2007, had an impact on everyone they met. Usually people go in and out of your life, but once the Irmschers were in your life they never really left. Countless people considered them family, because that’s just how they treated people: like family. This warm, welcoming spirit and need to care for people was the foundation on which Vivian built her life. Each person, each relationship was a treasure for life as far as she and Ted were concerned, and we are all better people having known her. Viewing will be on September 24th at Bobbitt Memorial Chapel at 5pm. Services on September 25th at Lutheran Church of Our Savior in San Bernardino at 12pm. In lieu of flowers memorials may be made to: Symphony Jeunesse, San Bernardino Valley Concert Association, or Lutheran Church of our Savior.

Let me tell you the story of Vivian Irmscher. It won&#8217;t be quite like she would have told it, because she would make sure you noted everyone&#8217;s first AND last names and heard at least something about who their parents or children are.... View Obituary & Service Information

The family of Vivian Evelyn Irmscher created this Life Tributes page to make it easy to share your memories.

Let me tell you the story of Vivian Irmscher. It won’t be quite...

Send flowers to the Irmscher family.