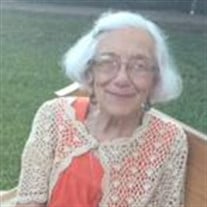 Verna Ardith (Mueller) Larson, age 85, passed away on December 15, 2016, in the home of her daughter and son-in-law in Lake Arrowhead, California. At the time of her death, she passed peacefully and was surrounded by family and friends. Her health had been more fragile in the last year of her life; she came to California to live with the assistance of her family. She was hospitalized on December 4th and came home for comfort and hospice care on Dec 10th. She died with faith, dignity, and grace, just as she had lived her life. Verna was born at home in Redwood County, Minnesota on July 25, 1931. She often referred to it as “Christmas Day in July”. The first portion of her life was lived in Echo, Minnesota and then in the greater Minneapolis area until she and her husband retired to Fairfield Bay, Arkansas. She attended school in the local school district and graduated high school with her sister. She lived for about 27 years in Fairfield Bay, Arkansas where she became an active member of the local community. Her days were filled with volunteering as a tutor in the local Shirley school district, attending weekly Bible study, acting as treasurer for her local neighborhood association and volunteering as the Church Secretary for Maranatha Assembly of God for 20+ years. She served with faith that she was doing God’s work and with a happy heart. Maranatha was the center of her community. After attending college in St Cloud, Minnesota, Verna was an elementary school teacher where she met her husband Irvin Larson who was a principal. After teaching for about 16 years, she stayed home to raise her young children. When they were old enough, she went to work for National Computer Systems where she used her outstanding organization skills as an event planner for corporate conferences. Throughout her life, she was an active volunteer and the teacher in her was always present. She still loved to learn, read, and travel to continue to educate herself and others. When her grandchildren would visit, she enjoyed taking them on field trips to new places. She was preceded in death by her husband, Irvin Myron Larson in 1994 (age 63) and her beloved son, Erik Paul Larson in 2001 (age 35), Her dear sister Dorothea Mueller Hayes died approximately two years ahead of her. Her beloved parents Elsie Martha Boettcher-Mueller and Paul Rudolph Wilhelm Mueller also preceded her in death. She is survived by her daughter Kim Susan Walker, and son-in-law Dr. Lawrence Walker (California) and her daughter-in-law Jennifer Larson (Florida). She was proud of and blessed with many grandchildren and called them her rainbow collection. Andrea Walker McDaniels (Zachary McDaniels), Kimberly Walker (Robert Beard), Alicia Walker, Edward Olson (Amy Olson), Cassandra Olson, Lauren Walker, Braden Walker, Makenna Larson, and Meileigh Larson. Great-Grandchild: Emree Rose Olson. Her brother David Mueller (Joyce) and all their children and grandchildren along with her sister Dorothea Hayes’s (Melvin) children and grandchildren survive her. She has many extended loving family members in Minnesota on her husband’s side of the family including Mary Lou and Jim Lezer and their children and decedents. Verna and Irvin adopted Kim and Erik when they were infants. This pattern of adoption continued for Verna throughout her life. She adopted and tutored students, and pastor’s families and children that served at Maranatha. Her kindness and love seemed easy and unending. To her, she was “a glass is half full” kind of woman. Her Celebration of Life and Funeral will be held in Arkansas at Maranatha Assembly of God in Shirley Arkansas, 11929 AR-16, Shirley, AR 72153 (501) 723-8181. Viewing at 10 AM, Service at 11 AM, Burial at the Woodland Memorial Park in Fairfield Bay and followed by a luncheon at the church hosted by Maranatha Assembly of God. The funeral home making arrangements in Arkansas is the Olmstead Funeral Home in Heber Springs, Arkansas. Although she loved to study the Bible as a whole, her scripture for life was: Psalm 46:1 – God is our refuge and our strength, a very present help in trouble. On behalf of Verna Larson’s family, we are grateful for all the lives she touched and that touched her. She lived a life of a good and faithful servant and we hope to live up to her role model in our lives as well. In lieu of flowers, we request that donations be made to Maranatha Assembly of God (11929 AR-16, Shirley, AR 72153) on her behalf.

Verna Ardith (Mueller) Larson, age 85, passed away on December 15, 2016, in the home of her daughter and son-in-law in Lake Arrowhead, California. At the time of her death, she passed peacefully and was surrounded by family and friends. Her... View Obituary & Service Information

The family of Mrs Verna Ardith Larson created this Life Tributes page to make it easy to share your memories.

Send flowers to the Larson family.