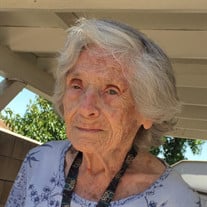 Vera passed away in Redlands, California, after a long battle with respiratory illness at age 97, She credited her longevity on her healthy diet and lifestyle: she didn’t drink or smoke. She was a wonderful person who was cautious and proud of her family. Born in Clayton, Indiana, she resided in San Bernardino, California, in her last years. In between, she lived in Indianapolis, Nutley, New Jersey, and Sepulveda, Ramona, and Rialto, California. Her parents were Verl Aubrey Johnson of Indiana and Martha Wood Johnson of Virginia. She survived her four siblings: Rex Johnson of Seattle, Wayne Johnson of Norway, Jerry Johnson and Jean Johnson Stroud, of Indiana. She nearly drowned at age six when she fell onto a cistern and was rescued by a neighbor. Her sister Jean Arabelle was named after the heroine. She graduated from Arsenal Technical High School in Indianapolis where she earned an award for shorthand proficiency. She married Raymond Lamb in Indianapolis in 1943 and together they raised four children over a 47-year marriage. She was a Cub Scout Den Mother and supported her children in Boy- and Girl Scout programs. She was very proud that all four earned college degrees. After raising her children, she worked for many years as a medical office billing clerk for general practitioner and later for a prominent dermatologist. Along the way, she pursued a lifelong love of sewing, a craft she inherited from her mother during the Great Depression. She enjoyed finding bargains at garage sales and, together with her husband and daughter Patricia, improved every home they lived in. She enjoyed playing and listening to organ music. She lived for the holiday gatherings with family. In later years, Vera was a favorite visitor among the clerks at the county Probation Special Courts building, a worksite of daughter Patricia perhaps because of her sporty wardrobe and big smiles. She loved sharing her home with several beloved dogs, including Peanut and Gina. She is survived by three of her four children: Barbara (Deceased), William, Steven, and Patricia Lamb; four grandchildren: Donna, Mark, Kevin and Scott; seven great-grandchildren: Andrew, Amanda, Jacob, Josiah, Cody, Connor and Owen, and her great-great-granddaughter, Amelia. Services-which are limited due to COVID-19 will be Friday, May 1st at 10:00 a.m. Live at Bobbitt Memorial Chapels Facebook page.

Vera passed away in Redlands, California, after a long battle with respiratory illness at age 97, She credited her longevity on her healthy diet and lifestyle: she didn&#8217;t drink or smoke. She was a wonderful person who was cautious and... View Obituary & Service Information

The family of Vera Mildred Lamb created this Life Tributes page to make it easy to share your memories.

Vera passed away in Redlands, California, after a long battle...

Send flowers to the Lamb family.