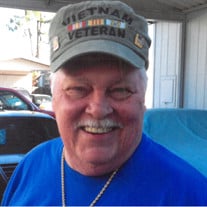 Stephen Lee ‘Skip’ Buckles, 69, passed away unexpectedly on July 6, 2017, at his home in Highland, CA. Born on November 24, 1947, in St. Louis, MO, Skip moved with his family to Pittsburg, KS; he graduated from Pittsburg High School in 1966. Shortly thereafter he enlisted in the U.S. Air Force and served as a Crew Chief in Vietnam on the C-7A Caribou, resupplying fighting forces in-country. Skip completed his Air Force career as a Staff Sergeant at Norton AFB in San Bernardino, CA, where he was honorably discharged in December of 1970. Skip was very proud of his service to his country. After his military service, he worked as an auto mechanic for 18 years. He was also a ‘Rascal’ Bartender at The Elbow Bend/Brass Key Bar in Highland, CA, for 15 years. He was preceded in death by his parents James L. Sr. and Patricia (Hunt) Buckles; his brother, James L. Buckles, Jr., and his stepmother Marjorie Buckles. He is survived by his brother Rick (Debbie) Buckles of Oklahoma City, OK; sisters Robyn (Kelly) Hart of Fairway, KS; and Kim Geier of Colorado Springs, CO; two nephews and one niece. Skip is also survived by his best friend. Dr. Mike Myers of San Bernardino, CA. Skip will be deeply missed by his family and his many friends. RIP Brother. A Celebration of Skip's life will be held at American Legion, Post 421, 28309 Highland Ave. Highland, CA 92346 from 1:30 p.m. to 4:30 p.m.

The family of Stephen Lee 'Skip' Buckles created this Life Tributes page to make it easy to share your memories.

Send flowers to the Buckles family.