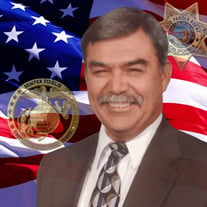 Smiley Sanchez Hernandez, 69, of Highland, California, died on December 17, 2020 at home and after a long battle with cancer. Smiley was born on July 19, 1951 in Loma Linda, California and was preceded in death by his father, Smiley, sister Josephine, brother, Danny Hernandez. Smiley attended Redlands High School, graduating in 1969, and went to San Bernardino Valley College, where he played, and loved football. Smiley enlisted in the United States Marine Corps in 1970. Smiley demonstrated exemplary skills as a marksman which landed him a position with the State of California Department of Corrections upon his honorable discharge from the USMC, Smiley worked for the Department of Corrections, spending time working for the Youth Authority, Fire Camp in Oak Glen and background investigations. He retired in 2007 as a Parole Agent having achieved numerous awards including Officer of the year with the Latino Peace Officers Association. After retiring in 2007, Smiley kept busy by attending various sporting events, practices and helping to coach his grandsons. A volunteer and parishioner at St. Adelaide’s, as well as at Aquinas High School, Smiley could often be found repairing things around the properties. He enjoyed his commitment as an usher on Sundays. He served on several church committees and was a proud member of American Legion Post No. 421. Smiley is survived by his wife of 45 years, Virginia Granillo-Hernandez, his children: Julia Willich (Kelly), Teri Montgomery, Martin Hernandez; son-in-law, Ozzie Castro; grandsons, Jordan Castro, Gavin and Ewan Montgomery, Jacob, Benjamin, Quintin and Curtis Willich; mother, Leonor Hernandez; brother, Rudy Hernandez, his "ya-ya" Andrea Milazzo, and in-laws, Sylvester and Vera Granillo. A memorial service for parishioners of St. Adelaide’s will be on January 15, 2021 at 8:15am at St. Adelaide Church. A private Visitation and Rosary will be held. Mass will be held on Monday, January 18, 2021 at 12:30pm at St. Adelaide Church, 27487 Baseline, Highland. Committal Service at Our Lady Queen of Peace Cemetery, Colton at 2:30pm. Mass will be livestreamed at www.Stadelaidehighland.com. Click on St. Adelaide Facebook link to join. In lieu of flowers, donations can be made to St. Adelaide School.

Smiley Sanchez Hernandez, 69, of Highland, California, died on December 17, 2020 at home and after a long battle with cancer. Smiley was born on July 19, 1951 in Loma Linda, California and was preceded in death by his father, Smiley, sister... View Obituary & Service Information

The family of Smiley Sanchez Hernandez created this Life Tributes page to make it easy to share your memories.

Send flowers to the Hernandez family.