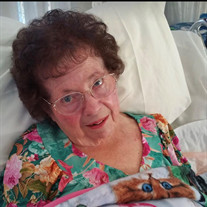 Shirley Ann Chilcote Reeves Was born on January 24, 1938. She was the daughter of Ray Marvin and Sarah Ellen Chilcote. She lived with her parents and her Brother Marvin Chilcote most of her life in San Bernardino California. Shirley Attended San Bernardino High School and graduated in 1955. Shortly after Graduation is when she met the love of her life while attending Community Bible Church in San Bernardino. Edward Allton Reeves proposed to Shirley who said yes! They were married on November 14th 1958. Shirley worked at Southern California Mortgage and Loan in Highland California for many years. Along came her daughter Shelley Lynn Reeves born March 1962 and Stephen Allton Reeves born November 1963. Ed and Shirley started the tool truck business in 1979. First was Mac Tools then Cornwell Tools. Ed took care of the tool sales and the route while Shirley took care of the office and paperwork. This allowed Shirley to stay home and care for their children and her aging parents. The time she spent with her mom and dad was a time she truly did cherish. Her Brother Marvin married his beautiful wife Lila Hubbard. Shirley was Blessed with two nephews Denny and Darrin Chilcote who she loved very much. Marvin and his family moved to Montrose Colorado where they enjoyed life. This is where Marvin Went to be with the lord. Denny married Terri Romero and we’re blessed with two sons Jeremy and Joshua then along came their beautiful daughter Rachel. Denny and his family along with Darren still live in Montrose Colorado today. Lila remarried a wonderful man Wil Fahlsing who now live in Bentonville Arkansas. Shirley truly loved her nephews and niece! As time went by Shirley then found the joys of Tole Painting becoming quite an accomplished artist. She enjoyed the fellowship of the ladies who attended the classes with her. In June of 1980 her daughter Shelley married the love of her life Robert William Bird. Shirley was then blessed with the arrival of Grandson Paul Robert Bird , Granddaughter Amanda Lynn Bird and Grandson Dallas Michael Bird. As time went by her Granddaughter Amanda married Travis Lee England . Shirley was Blessed with two Great Grandson’s Ivan Robert and Jake Wyatt England. Her Grandson Paul married Jessica Lauren Allison . Shirley was blessed again with two more Great Grandson’s . Mason Robert and Wade William Bird. Her Grandson Dallas married the love of his life, Tiffany Ann Grass. Shirley truly enjoyed being a grandmother and a great grandmother! She loved to watch the little ones grow and the love they shared. Her son Stephen (also known as Steve) after high school worked hard to received a welding certificate. He decided to venture into the world of Plumbing becoming a licensed Master Plumber. He lived for a few years in Arizona moving back to California around the time that Shirleys health began to decline in 2008. Even though Shirley was bed bound she lived every day excited to hear about her children, grandchildren, great grandchildren and friends. Praying daily for everyone. Shirley was placed on hospice two different times. To the joy and surprise of her family she was released back to daily life with her husband Ed her son Steve and daughter Shelley right by her side. The third time she was placed on hospice and Lord decided to call her home on September 4th. She went peacefully with her family by her side in the arms of angels to heaven. We are sure the lord welcomed her with a loving embrace.

Shirley Ann Chilcote Reeves Was born on January 24, 1938. She was the daughter of Ray Marvin and Sarah Ellen Chilcote. She lived with her parents and her Brother Marvin Chilcote most of her life in San Bernardino California. Shirley Attended... View Obituary & Service Information

The family of Mrs Shirley Ann Reeves created this Life Tributes page to make it easy to share your memories.

Send flowers to the Reeves family.