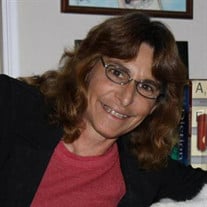 Sharon Diane Mohr was born on August 15, 1959 at Cedar Sinai Hospital in Los Angeles, California on her grandmother, Anna Freilich Mohr’s birthday. William Myron Mohr and Bernice Claire Garland were proud parents. Sharon was a very active toddler, and was excited to get a baby sister, Janet, less than 2 years after she was born. Sharon would throw stuffed animals in Janet’s crib to try and wake her up to play. At times it would be very difficult to find baby Janet underneath all the toys. During the early years Sharon enjoyed playing “school” and "store” with Janet. Their father loved teaching them card games and all kinds of sports. Sharon was very athletic! She was very good at softball, miniature golf and bowling to name a few. They were fortunate enough to carry fond memories of their father taking them to Dodger games, his tennis matches, many different parks, bowling allies, miniature golf courses, as well as fishing at Happy Jack’s Fish Farm and yearly vacations in Santa Barbara and San Diego with cousins Lori, Marci and Uncle Stan. Sharon met Steve McDermott at grad night at Knotts berry farm. It was love at 1st sight for both. Although they went to high school together they didn't know each other until that night. Their 1st date was at McDonalds and the drag races. They were married 2 years later. Besides drag racing Sharon loved the outdoors, camping, and fishing among other things. One of Sharon’s many interests was writing and photography. She got her Associate Science degree at Mt. Sac College and became a Photojournalist. While Sharon and Steve were heavily into racing Sharon used her photo Journalist skills and started a business to help promote racers and also wrote for a national racing newspaper. Steven McDermott, Jr., frequently known as “junior” was born on October 16th, 1989. He was the joy of Sharon’s life. In 1995 the McDermott Family moved from California to Texas. Sharon was very excited to move to Texas, the highlight of the trip was driving her fully restored 1965 mustang there, which included parts of route 66, one of Sharon's great interests. She spent 15 years living in Callisburg, TX on a 15 acre farm surrounded by horses, cows, and other livestock. Although she always had cats and dogs, living in the country is what really brought out her love for animals. She had as many as 6 cats at any given time and this is where she found Neptune, as a kitten living in a barn. She was also heavily involved in Junior's school and also wrote for various local newspapers for many years. She enjoyed being a stay at home mom while watching Junior grow up while also being a freelance writer. Sharon also served as a city councilwoman for a few years while in Callisburg. When Jr graduated from HS and went to college, Sharon wanted to be near him and thus the family moved to Mansfield, Texas. While in Mansfield, she was involved with the local SPCA and helped build a facility expansion for cats there. Although she starting writing her book while living on the farm, she completed Neptune the Special cat while in Mansfield and had it published. During the summer of 2014, Sharon moved back to California and moved into Janet’s cabin in Crestline, in the San Bernardino mountains. Sharon was ecstatic about living among all the nature. She loved all the wild life and her four furbabies loved their “catio”, a partially enclosed patio where the cats could stay outside and be safe. Sharon joined not one but two bowling teams and made friends right away. She joined the team in Vegas for the tournament on two occasions. Sharon was quite the competitor, she managed to get very high scores even while on oxygen. Again, she absolutely loved the mountain living and all the friends she made.. Sharon would make trips down the hill often to visit her sister, Janet, her nephews and mom often. It was magnificent that she and her sister got to reconnect and develop such a strong bond these past two years. Sharon also got to reconnect with high school friends from Royal Oak. Between her high school friends and all her popularity on Facebook and “Neptune the Special Cat’s” Facebook page, she constantly busied her time on the computer, phone, and mailing/receiving gifts and books. Sharon took residence in the following cities before entering the gates of Heaven: Glendora, Azusa, Covina, Glendora, Covina, Gainesville, Callisburg, Mansfield, and finally Crestline, California. A tribute website has been created in Sharon's memory. Please visit the page by clicking the link below http://www.familytributestudios.com/sharon-mohr

The family of Sharon Diane Mohr created this Life Tributes page to make it easy to share your memories.

Send flowers to the Mohr family.