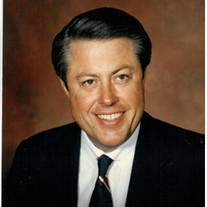 Ronald G. Skipper, age 76, of San Bernardino, passed away at home surrounded by his loving family on Wednesday, June 28, 2017. He was born December 16, 1940, in Brawley, CA to Roland and Vena Skipper. A resident of San Bernardino for 68 years, Ron was the product of public schooling, having attended Harding Elementary, Sturges and Arrowview Junior Highs. He was a graduate of San Bernardino High School, class of ‘58, the University of Redlands, and the University of California - Hastings College of Law with honors. After law school, he returned to San Bernardino and joined the law firm of Chapman and Sprague. In 1967, Ronald opened his private law firm, where he practiced until his retirement in 2012. Throughout his career, his practice included personal injury, business litigation, and administrative and education law. He represented the California Teachers’ Association, Inland Empire Auto Center, and the National Orange Show. His devotion to the law and his success as an attorney led to his being elected President of both the California Trial Lawyers and the San Bernardino County Bar Association. In 2005, he was the recipient of the John B. Surr Award, which is awarded to a member of the legal community who best exemplifies the high standards of the legal profession and the administration of justice. Outside of his legal profession, Ronald proudly served on the board of directors for Stater Bros. Markets and was one of the founders of Life Savings Bank, now Pacific Premier Bank. There, he served on the board of directors and as Chairman of the Board. In addition to his professional accomplishments, Ron was an active member of his community. He was instrumental in establishing the local chapter of the Boys & Girls Club of America and his dedication to the city is evidenced by his service to the San Bernardino Civic Light Opera, Economic Development Council, Chamber of Commerce, St. Bernardine Hospital Foundation, Mayor’s Council for International Friendship, Sister Cities Committee, and the California State University S.B. Foundation. Ron is survived by his high school sweetheart and wife of 57 years, Wanda O’Brien Skipper; children, Rhonda Skipper Marple of Dallas, TX, Kristin Skipper Arellano, of Palm Desert, CA, and Garret Skipper of Rancho Mirage, CA; grandchildren, Christopher Marple, Lauren Marple, Alysa Arellano, and Erynne Arellano; sisters, Geraldine Atkins of San Bernardino, CA and Marilyn Stubbs of Oklahoma City, OK; and numerous cousins, nieces and nephews.

Ronald G. Skipper, age 76, of San Bernardino, passed away at home surrounded by his loving family on Wednesday, June 28, 2017. He was born December 16, 1940, in Brawley, CA to Roland and Vena Skipper. A resident of San Bernardino for 68 years,... View Obituary & Service Information

The family of Mr. Ronald Gordon Skipper created this Life Tributes page to make it easy to share your memories.

Send flowers to the Skipper family.