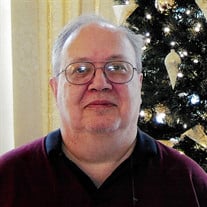 We are sad to announce that Roger William Anderson passed away peacefully on June 19, 2019 at the age of 76 from injuries he suffered from a fall while returning to his home in Riverside, CA. We cannot thank enough the entire staff at the Riverside Community Hospital in Riverside, CA for their excellent care. Roger was born in St. Cloud, Minnesota on January 31, 1943 to Lorraine and Einar Anderson who have predeceased him. From his earliest days, Roger was destined to face the numerous challenges of the developmentally disabled. With the loving support of his parents and brother, Allan, he was able to thrive and lead a meaningful life. After attending various work training programs for the developmentally disabled, Roger worked for over 33 years as a busboy, first at the Happy Chef Restaurant in Mankato, MN and then at Marshall Fields in Minneapolis, MN. After moving to California with his mother in 2004 to be closer to his brother, Roger was his mother’s primary caregiver under his brother’s supervision until her death in 2005. After moving to California, Roger and his mother lived independently in their own mobile home for several years. After his mother’s passing, Roger moved into his own apartment in a rent-subsidized senior housing building. He lived there independently for almost 10 years with support from the Inland Regional Center. In 2018 Roger’s health status reached the point where he needed medical supervision so the IRC placed him in a residential board and care home in Riverside, CA where he lived until his accident. He was treated as family and was happy there. While there, Roger went on many outings around southern California and was active in many community programs. As he got older, Roger had the opportunity to see the United States as he and his mother travelled extensively during their vacations. Along the way, Roger started a small collection of miniature sailing ships as well as a more substantial collection of movie DVDs. His favorites were westerns although his nephew, James, introduced him to the world of Star Wars, the Avengers, and the Guardians of the Galaxy. James was Roger’s Star Lord and Roger thought the world of him. Roger is survived by his brother, Allan; his sister-in-law, Christine; his nephew, James; as well as extended family primarily in the Minneapolis, MN area. Roger will be interred in his grave site next to his mother and father under the Anderson headstone in Oak Hill Cemetery in Minneapolis, MN.

We are sad to announce that Roger William Anderson passed away peacefully on June 19, 2019 at the age of 76 from injuries he suffered from a fall while returning to his home in Riverside, CA. We cannot thank enough the entire staff at the Riverside... View Obituary & Service Information

The family of Roger Anderson created this Life Tributes page to make it easy to share your memories.

We are sad to announce that Roger William Anderson passed away...

Send flowers to the Anderson family.