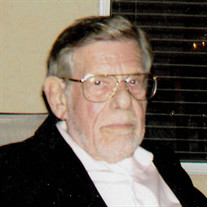 Husband, father, musician, teacher left this world on November 11, 2018. He was born in Hollywood, CA on February 23, 1921. He was 97 years old. Raised in Santa Paula, CA he was already an avid musician by the time he was in high school. There he was in multiple music groups as well as forming many other groups of his own. More importantly he met the love of his life, Marjorie Bridges to whom he was married for 75 ½ years. Mr. Van Horn was educated at UCLA and Claremont Mens College. He was a member of Delta Chi Fraternity, Native Sons of the Golden West and DeMolay. At Claremont, he attained his Masters of Music degree. A copy of his Master’s thesis was requested by the Library of Congress. Called to duty in WWII, he was a proud member of the U.S. Army Air Corp. While still on active duty, he married his sweetheart on March 21, 1943. She was able to join him and together they were able to work for the cause side by side. After the war, Mr. and Mrs. Van Horn moved to San Bernardino where he began his teaching career at Highland Jr High School. For the duration of his 30-year career there he gave the gift of music to thousands of students in bands, orchestras and choral groups. He was beloved by all his students and honored them with his outstanding musicianship and brilliant humor. A working musician since the age of 16, as well as in the Army, Mr. Van Horn continued playing the bass in shows, concerts, orchestras and private affairs. As bass players for his four-piece band The Notables, Mr. Van Horn performed from Lake Arrowhead to Palm Springs, Las Vegas to Los Angeles, and all points in between. Mr. Van Horn was a man of extreme intelligence and wonder for all things music, science and art. He never stopped questioning the many aspects of the world and the universe he lived in. Mr. Van Horn was an exceptional man who loved his family, his country, and his God. He was always ready to help anyone that needed him. He will be remembered by all who knew him. He is survived by his truly beloved wife of 75 ½ years, Marjorie Ellen, and his adored children, his daughter Lynnette and his son Rod Van Horn Jr., deceased. We’ll meet again-don’t know where, don’t know when-but we’ll meet again. His memorial service will be on Monday, November 19, 2018 at 7:00 p.m. at Bobbitt Memorial Chapel, 1299 E. Highland Ave San Bernardino, CA. To leave an online condolence on Roderick’s memorial page please visit www.bobbittchapel.com

Husband, father, musician, teacher left this world on November 11, 2018. He was born in Hollywood, CA on February 23, 1921. He was 97 years old. Raised in Santa Paula, CA he was already an avid musician by the time he was in high school. There... View Obituary & Service Information

The family of Roderick Howard Van Horn Sr created this Life Tributes page to make it easy to share your memories.