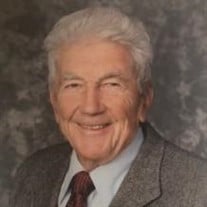 Robert L. Logsdon, Jr. (1917 – 2018) A San Bernardino native, “Bob” was born Sept. 1, 1917 to Robert Sr. and Bonnie Gardner Logsdon, joining sister, Margaret. When he was two, the family relocated to Kentucky. Upon high school graduation, Bob and Margaret returned to San Bernardino. He extended his education at SBVC, while working at various jobs. In 1938, he married Barbara Muensenberger, and they had two children, Charlene Kay and Robert H.. He worked as service station attendant until WWII, when he entered the Navy. Leaving active duty, he stayed in the Navy as a reservist, returning to active duty during Korean Conflict and Viet Nam, retiring in 1977. When not on active duty, he: Operated/then owned the 6th & H gas station, worked for Smart and Final, and became involved in the photography business, first as an employee, then as owner of Empire Camera, with partner, Claude Williams. He retired from the business in 1977, but not from photography. Bob was an excellent photographer, and received many awards for his work, including fellowship in Photographic Society of America, and was on the job at a recent ceremony at his church. He and Barbara separated in 1949. In 1952, he married Ruth, and became the father of her daughters, Sydney and Nancy. Bob and Ruth traveled the world, (in their motor home when in the USA), and had 51 years together until Ruth passed in 2004. He planned to remain a bachelor, but the Lord had other plans for him. In 2009, he married Donnis, a fellow Rotarian and a staunch “bachelorette”, and increased the family size when he added her children; Liz, Andy and Kurt. Bob and Donnis continued the RV travels, and attended the 2014 Rotary International Convention in Sidney, Australia. Besides the Rotary Club of San Bernardino (52 yrs), Bob was a member of the Elks Club (75 yrs), Death Valley 49’ers (69 yrs), American Legion (12 yrs), the USS Laffey DD-724 Association (since its inception) and First Christian Church of San Bernardino (most of his life). Bob was very active in Rotary (including District 5330), 49’ers, The Laffey Association, and his church, and constantly taking pictures. This amazing man, loved by everyone who knew him, left earth for a better place, very quickly early in the morning, September 30, 2018. Bob is pre-deceased by his parents, sister Margaret, and daughter, Nancy. Surviving are wife of 9 years, Donnis; children Robert and Charlene (Lyle) Christensen, Sydney Kurtz, Liz (Paul) Stone, Andy (Debbie) Meeder and Kurt

The family of Robert Lincoln Logsdon created this Life Tributes page to make it easy to share your memories.

Send flowers to the Logsdon family.