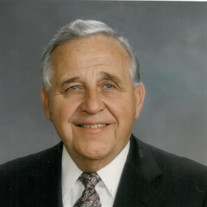 Robert 'Bob' Thomas Gogo, 88, whose vision and determination founded one of the Inland Empire’s leading corporations - Hub Construction Specialties (Hub) passed away on Saturday, November 12, 2016, of a heart attack with his wife, Bernice, of 63 years by his side. A Los Angeles native of Yugoslavian (Serbian) ancestry, Bob was educated in military schools and attended the University of Southern California, majoring in engineering and business. He was drafted into the Army before graduating and served in Japan and Korea during the Korean conflict. Bob’s work experience began at 13 with his father, a large pipeline contractor who did much defense work. The untimely death of his father did not allow the business to continue so when Bob returned from the Army he went to work for a concrete accessory manufacturer. After a few years, in 1958, he started Hub in San Bernardino as a one-man operation. From that small garage, Hub today has grown to a fifteen branch/two distribution center business with over 260 employees. Bob was a pioneer in the development of the Inland Empire, with projects such as the U.S. 15/10 interchange. He foresaw the potential for enormous development and population growth and created a new logistical process for large-scale construction through Hub. He is past president of STAFDA, an international trade association, as well as his country club and held Board of Trustee positions with several charitable organizations including St. Bernardine Medical Center Foundation. He loved golf and all spectator sports, especially USC Trojan Football. Bob is survived by his wife, Bernice, daughter Lisa Brooks and her husband David (San Bernardino, CA) his grandchildren – Alexandra, Chelsea, and Stephan - in addition to great-grandchildren Emily, Jace and Marley. He is also survived by his brother Thomas Gogo (Carlsbad, CA) In lieu of flowers, donations may be made to Aquinas High School of San Bernardino, Scholarship Program, 2772 Sterling Avenue, San Bernardino, CA 92404.

The family of Mr. Robert Thomas Gogo created this Life Tributes page to make it easy to share your memories.

Send flowers to the Gogo family.