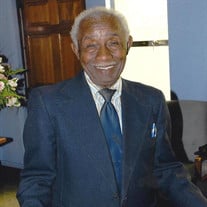 Mr. Robert Lewis Baker, Sr., long time resident of San Bernardino, passed away Sunday, December 1, 2019. Mr. Baker was a resident of San Bernardino for 73 years. He was born May 16, 1925 in Rotan, TX and went to school there. He was the son of Mamie & John Baker. At church on December 7, 1941, the congregation received the news of the attack on Pearl Harbor. Robert immediately wanted to enlist in the military to help defend his Country. Unfortunately, he was only sixteen and because of his age he would not have been permitted to enlist. He told his Mom that he wanted to join, but his Mom explained he was too young. He told her he was going to enlist anyway and tell them he was eighteen. His Mom told him if he did she was going to go to the recruitment office and tell them he was under age. Robert worked at different jobs while attending school in Rotan, including picking cotton, working in a cafe, and working construction. In 1943 at age 18, he decided he would join either the Army or the Navy. Because his Dad John Baker had been in the Army in WWI he chose the Army. Robert Baker moved to San Bernardino in 1946. He met his future wife Ivry Lee Townsend at White Rose Church of God in Christ where her uncle, Lee Carter was the pastor. Sergeant Robert Lewis Baker married Ivry Lee Townsend in 1947. They had three children. Sgt. Baker was honorably discharged from the Army at the end of the war. He worked at King's Barbershop shining shoes, and as a custodian until he was hired at Norton Air Force Base as a laborer in 1948. Sgt. Baker took a leave of absence from Norton, during the Korean conflict and reenlisted in the Army in 1951. He was stationed first in Korea and then in Germany. In 1953 he returned to Norton AFB and worked his way up from laborer to a Heavy Equipment Operator. In 1980 Robert retired from Norton Air Force Base as Chief Operator of the Flight Line Sweeper for the runways. He was very proud of that position, because he knew how crucial it was for the safety of the huge cargo planes that the runways contained no grit or gravel. When Sgt. Baker was in the service stationed away from home during the Korean Conflict, he made a commitment to God that if he was able to return safely from his service duties to his beloved Ivry, he would dedicate his life to serving God. His career in the church started in 1953 when he joined Reverend Lee Carter's small church on the west side of San Bernardino called Bethesda Temple of God in Christ. He worked hard as Treasurer and as Trustee. With the help of the small congregation, the members were able to build a larger church in 1963. Deacon Baker was very respected. He taught Sunday School classes to all age groups. He was an avid Bible scholar who patiently taught the "word of God," and mentored many young people to become leaders both in the church and in the community. He was known for his patient, kind counseling and his ability to make people laugh no matter how stressful the situation might be. Deacon Baker enjoyed sports. He was a baseball coach for a Pony League team, which won City Championship in 1969. He enjoyed league bowling and continued to bowl in leagues until 2012. He stopped bowling to spend time with his beloved wife Ivry. Due to her illness she had to be cared for in a Convalescent home in Loma Linda. In August of 2014, Robert secured an apartment in the retirement section of the Convalescent home where Ivy lived. On December 1, 2014 Ivry passed. Robert went to live with his daughter M. Joyce. He became a member of the Willie White Park Focus Group and the Pomona Optimist Club. He often joined his daughter for the activities at the Pomona Eagles #2215 where he enjoyed Taco Night Mondays and Friday Night Dinners. On December 1, 2019 Robert Baker peacefully passed. He left to join the love of his life, his beloved Ivry. Prior to Mr. Baker's passing he lost his parents Mamie and John Baker; his brothers John, Lester, Nathaniel, and Raymond Baker; his sister Mayme Moore. Mr. Baker is survived by son, Robert, Jr., daughters, M. Joyce and Wanda; grandchildren Christina and Shawn; daughter-in-law Jennifer; son-in-law Vernon, great-grandchildren: Stephen, David, Alicia, Aaliyah, and Rahsan, sisters Mattie Williams and Carri Lipsomb; nieces, nephews and many friends. In lieu of flowers please send plants or donate to the charity of your choice.

The family of Mr Robert Lewis Baker created this Life Tributes page to make it easy to share your memories.

Send flowers to the Baker family.