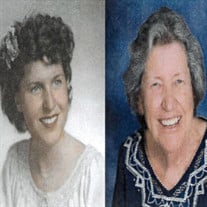 PAULINE ELAINE DOYLE On October 2, 1926 a newborn girl inhaled for the first time. Pauline Elaine Gormley became the fourth daughter of Andrew and Mary (Knox) Gormley. She joined her sisters, Jane Anne, Patricia Isabel and Mary Elizabeth in the family home on Victoria St. in San Bernardino. Pauline was raised in San Bernardino during the Great Depression and World War II. She was educated in the San Bernardino school system attending Harding Elementary, Sturges Jr. High School and San Bernardino High School. After receiving her Associate of Arts degree from San Bernardino Valley College she transferred to UCLA, from which she was graduated at the age of 20 with a degree in accounting. A few weeks later, in June of 1947, she married her high school sweetheart, Richard Francis Doyle, who also was a native of San Bernardino. They had met at a youth group dance at St. Bernardine church. Their early married life was spent in Santa Monica. Richard, a WWII Navy veteran, attended Loyola University while Pauline went to work for the Atomic Energy Project on the campus of UCLA. Moving to Pacoima the couple started to raise a family, first welcoming their daughter, Judith Elaine, followed by their son, Richard James. In 1955 the family returned to San Bernardino where Pauline devoted her time and energy to raising the children. She was active in Marshall Elementary PTA and the Junior Women’s Club in addition to promoting UCLA Alumni events. Pauline later migrated her Jr. Women’s membership to the Women’s Club, eventually attaining more than 50 years with the organization. At that time the family were members of the Holy Rosary Parish. Later, when they had moved within the parish boundaries of Our Lady of the Assumption, Richard and Pauline worshipped there. Never just a member, Pauline became involved with any group she joined, serving terms on the board of the Women’s Club of San Bernardino, President of the Marshall PTA as well as the Arrowhead Women’s Golf Association, and active in various professional organizations. As the children aged and became more independent Pauline returned to the work force in the 1960s as a bookkeeper and tax preparer. In 1970 she and Richard acquired a tax preparation and bookkeeping practice which they operated for 21 years. It was during this period of their life that they joined Arrowhead Country Club where they made many new friends and strengthened the bonds with long-time friends. Pauline and Richard led a fulfilling life. They traveled as a couple, as a family and sometimes with friends. They were able to visit Hong Kong a number of times, Thailand, the British Isles and Germany. They followed the Lewis and Clark Trail, saw the New England states in the colorful fall. The two of them cruised the coast of Alaska and took many golfing trips to resort areas of the United States. They enjoyed many dinner and dancing parties and had traditional St. Patrick dinners with their friends, the Popes, Haldorsens and Cannans. Pauline exercised her mind playing bridge and working on crossword puzzles. She played bridge

The family of Pauline Elaine Doyle created this Life Tributes page to make it easy to share your memories.

Send flowers to the Doyle family.