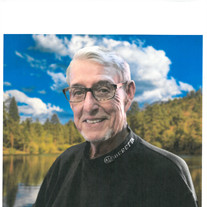 Paul Wayne Pinckney passed quietly at home on April 15, 2017 in Highland, California at the age of 74 following a short illness. Paul was born on July 10, 1942 in San Francisco, California to William James Pinckney and Barbara Fern Wingo Pinckney. Paul was the beloved and treasured husband of Martha Patton Pinckney for 43 years. He is also survived by four children; Steven Craig Pinckney, Elizabeth Bond Bishop (Jim), Diana James Davis and Christopher Parker Pinckney (Kim) and nine grandchildren whom he adored; Carynn, Chase and Clay Pinckney, Katherine (Katie) and Emily Bishop, Johnathon Person, Isabell Davis, Ethan and Harper Pinckney. Paul is also survived by his sister Marilyn Hunt (Robert); brother-in-law Russell Patton (Jane) and sister in law Pam Patton (wife of Richard, deceased). Ten nephews and two nieces also will miss “Uncle Paul” as well as “adopted” grandchildren Zac and Hanna Jure and a multitude of friends. Paul dearly loved his family and friends and was fiercely loyal to all. Paul was raised in San Francisco, California and Sugar House, Utah until age of nine when he moved to South Pasadena, California where he lived until college. He graduated from South Pasadena High School (Class of 1960), Pasadena Community College and La Verne University. Paul later earned the CPCU (Chartered Property Casualty Underwriters) designation. He also taught classes at San Bernardino Valley Community College in the CPCU discipline. His career path took him from Sales to Risk Management in the insurance industry. He began with the Aetna Insurance Company and left to work at Mund McLauren Risk Management with his father. The company went through many mergers and Paul retired in 2000 from Towers Perrin, an International Risk Management Insurance company. He traveled the world both in business and pleasure visiting many countries and continents. In high school he played football and baseball. As a young boy, he played baseball and had the pleasure of being coached by his Dad. Paul followed in his Dad’s caring footsteps and coached baseball for son Steve and daughter Lisa. He was a soccer referee in both San Bernardino and Redlands as all four children played. Arrowhead Alligator swim and dive team enjoyed his support for many years as grandchildren participated in swimming and diving. He took great pleasure in the successes of his children and grandchildren. Paul took up the sport shotgun shooting and greatly enjoyed Trap, Skeet and Sporting Clays. He was a loyal and committed member of the California Indian, Makaha Indian, and Pacific Indian shooting clubs serving as Chief (President) of the California and Makaha groups. He also helped manage the Arrowhead Country Club Shooting Range. In all shooting events and activities, Paul enjoyed both the sport and camaraderie of his fellow shooters. Paul had many a story to tell! Rotary International was a focus of service and dedication for Paul. He served as President of the Rotary Club of San Bernardino North and on many committees and as an officer in Rotary District 5330. His focus was often on scholarships both locally and internationally. Paul’s community activities included his serving on Boards and as an officer in many organizations. Included in his service were the The Salvation Army, AYSO, Carriage Club as well as his support to Martha in work with the Assistance League where he gladly served on the Gentlemen’s Floor committee and as a member of the Signature Club. Paul was a man of action and passion and was most passionate about his family, especially his children and grandchildren. He and Martha have been committed to the education and successes of each one as well as to other young children. In consideration of Paul’s devotion and work for students in all situations, the family suggests a donation to the Rotary North Scholarship and Youth Support Activities. If doing so, please send donation in Paul’s name to Ken Goddard at Soren McAdam Christianson LLP, 2068 Orange Tree Lane, Redlands, CA 92374. Services will be held Thursday, May 25, 2017, 1:30 pm at First Presbyterian Church, 1900 North D Street, San Bernardino, CA 92404 The Services will be followed by a Celebration of Life at Arrowhead Country Club, 3433 Parkside Drive, San Bernardino, CA 92404. Please join the family at either or both of the events.

The family of Mr. Paul Wayne Pinckney created this Life Tributes page to make it easy to share your memories.

Send flowers to the Pinckney family.