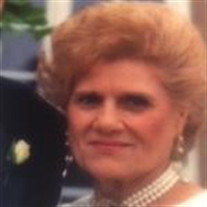 Olga Lorraine Zachar Walek Ph.D.of Rialto California lived a remarkably long 92 years. Olga was born on a Saturday, April 26, 1924 passed on a Friday, December 23, 2016. Olga Lorraine born in Lyndora, Pennsylvania was the fifth of twelve children of Peter Zachar and Fenna Bazar originally of Sanok, Austria. Olga was predeceased by her husband of fifty years fellow University of Pittsburgh Alumina Maj. Michael A. Walek. USAF Ret. on October 2, 1995. They have five children Michael, Mark, Brian, Perry and Lorna, with seven grand children and six great grandchildren. Dr. Walek was known early on to be a beautiful and brilliant woman in her time. For a daughter of Immigrants that came through Ellis Island graduating as Valedictorian of Butler High School, Pennsylvania to be granted a full medical school scholarship to the University of Pittsburgh in 1942 is an outstanding accomplishment in its time. This was the beginning of what would be a lifetime of achievements for Dr. Walek going on to obtaining degrees from Loma Linda Medical School, UCLA and UCR. Dr. Walek served the United States War efforts during World War II as a Nurse Cadet. She met and then married then returning POW Maj. Michael A. Walek and was a twenty year officer's wife in the service of our country moving every few years from one military post to another as her husband was active duty. After twenty years as a military officer’s wife and raising five children Dr. Walek returned to University to obtain even more advanced degrees, including a Ph.D. Dr. Walek taught nursing at many collages and Universities over the years. She was the Dean of the Department of Nursing at Gonzaga University in Spokane, Washington, Riverside City Collage, California State University San Bernardino, Valley Collage, and was even invited to Guest Lecture at the University of Moscow when it was still under Soviet rule. Dr. Walek enjoyed travel often talking of her trips with her family to places such as London, Venice, Florence, Paris, Rome, New York, Moscow, Kiev, Helsinki, and many other places around the globe over her 92 years. She loved to read and this was her passion that until the very end of her life was where you would find her, sitting reading transported through her books to places far way in pages that took her from her home in Lyndora, Pennsylvania. It was through her books, the daughter of Austrian immigrants new to this country where anything is possible Dr. Walek lived this for 92 years. Services for Olga Lorraine Zachar Walek Ph.D. are to be held on Friday, January 13, 2017 at 12:00pm Bobbitts Funeral Chapel 1299 East Highland San Bernardino, CA Following Military Services 2:01 pm National Cemetery Riverside

The family of Mrs Olga Lorraine Zachar Walek Ph.D. created this Life Tributes page to make it easy to share your memories.

Send flowers to the Walek family.