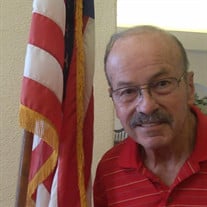 Nelson John Brown, born April 13, 1933, in San Bernardino, CA to Fred and Frances Brown passed away on May 11, 2017. Nelson had an older brother Donald Brown who passed in 2007. He graduated from San Bernardino High School in June of 1951. He enlisted in the Navy in 1952 and honorably served during the Korean War. During his Naval service, he married Ellen Louise Buzzelle, on November 23, 1953. After his service, Nelson entered the California Highway Patrol Academy in 1960, he was promoted in 1970 and assigned to Glendale while his family remained in San Bernardino. After serving for 25 years he retired as a Sergeant and finally returned to San Bernardino to be back with his family full time. He worked for his Bachelor’s Degree during that time, at Cal State San Bernardino and became a teacher; working for the San Bernardino School District until his retirement in 2012. Some of the classes he taught included Law Enforcement. Nelson took great pride in his CHP profession and was quick to correct anyone who referred to him as a ‘policeman’! He was a California Highway Patrolman through and through. He was preceded in death by his brother Donald and his loving wife Ellen. He is survived by his children, Donald Nelson (Cinde) Brown of San Bernardino, CA; Allan George Brown of New Mexico; Teresa Ann Cary of Colorado and Gene Franklin Brown also of San Bernardino, CA. Also surviving him are his grandchildren, Michael, Angela, Levi, Amritjot Khalsa, Nirankar Khalsa, Eavie Arntzen, Eric, Sean, Gene and Tarah and his six great-grandchildren. A committal service will be held for Nelson and his wife Ellen, who passed in 2012

Nelson John Brown, born April 13, 1933, in San Bernardino, CA to Fred and Frances Brown passed away on May 11, 2017. Nelson had an older brother Donald Brown who passed in 2007. He graduated from San Bernardino High School in June of 1951.... View Obituary & Service Information

The family of Mr. Nelson John Brown created this Life Tributes page to make it easy to share your memories.

Send flowers to the Brown family.