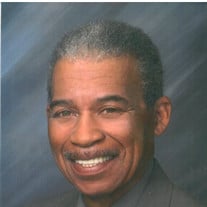 Merelynn Morris Johnson, 78 of Highland, CA; passed away on Monday, Feb. 13, 2017 in San Bernardino, CA. He was born in Iowa City, IA on April 14, 1938. He grew up in Ottumwa, IA and joined the United States Navy in April of 1958. He met the love of his life Bing Marcelo while stationed in the Philippines, and they were married on June 22, 1968. Bing preceded him in death on Sept. 18, 2016. He is survived by his children, May and Jay and his grandchildren Jacob and Hailey. He is also survived by two sisters, Michal Eldridge and Roxann Braden of Reno, NV, their families and nieces, nephews and cousins. He served over 20 years in the United States Navy. He was a Yeoman Chief Petty Officer and a Vietnam Veteran. Merelynn retired from the Navy in 1978. After retiring from the Navy he worked for the State of California Department of Motor Vehicles and retired as a Hearing Officer in April 2000. As a resident of Highland, CA he devoted himself to his wife and family. Merelynn was a dedicated, generous, devoted husband, father, grandfather and friend who put others first. Visitation will be at Bobbitt Memorial Chapel on Sunday, Feb. 26, 2017 from 5 to 7 p.m. with a Rosary to follow. Mass of the Christian Burial will be Monday, Feb. 27, 2017 at 10 a.m. at St. Adelaide Catholic Church, Highland, CA with interment to follow at 1:00 p.m. at Riverside National Cemetery, Riverside, CA.

The family of Merelynn Morris Johnson created this Life Tributes page to make it easy to share your memories.

Merelynn Morris Johnson, 78 of Highland, CA; passed away on Monday,...

Send flowers to the Johnson family.