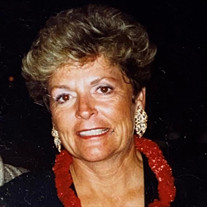 Mary Ellen Samra, 77, of Yucaipa, California passed away from this life in Redlands, California on January 25th, 2021. Mary Ellen was born on March 18th, 1943 in Chicago, Illinois to Harold and Mary Jane Finnigan. She was preceded in death by both of her parents. Mary Ellen was survived by 6 children, Theresa Rios of Yucaipa, CA; Dan (Lisa) Moore of Yucaipa, CA; Darrin (Marleah) Moore of San Bernardino, CA; Bill (Michelle) Samra of Highland, CA; Ben (Sarah) Finnigan of Highland, CA; Chris (Jessica) Samra of Apple Valley, CA. Mary Ellen was also preceded in death by her sister, Sierra Samra and her brother, Harold Finnigan. She is survived by her brother Danny Finnigan of Fallbrook, CA. Mary Ellen was blessed with 6 children, 24 grandchildren, 8 great-grandchildren, and 3 great-great-grandchildren. At a young age Mary Ellen and her family moved from Chicago, where she was born, to southern California where she continued to grow up with her brothers and sister. Mary Ellen attended San Bernardino High School in San Bernardino, CA.. Mary Ellen was married in 1963 and began her own family, which eventually included 6 kids. She worked at the telephone company, was a mystery shopper for Fedco, and then found a position in a medical office. Mary Ellen’s defining career position was her time spent helping to build and run the Family Practice Medical Group at St. Bernadine Medical Center in San Bernardino, CA. After rising to become administrator of this group, and with the help of many employees whom she loved dearly, and under the guidance of some instrumental physicians she worked with, she helped to successfully co-pilot the medical group to great levels of success and longevity to the benefit of many, many patients, the doctor’s group, and the Medical Center itself over some 27+ years. After retiring from work in 2006, Mary Ellen spent more time traveling, enjoying her family and grandchildren, volunteering at church. and being involved with various charity endeavors. She was very involved with St. Catherine’s church in Rialto, CA early on, where she was a member of the Catholic Daughters group for many years. She later spent her free time volunteering with different groups including the Marian Movement of Priest Prayer Group, the Catholic Daughters of America, and the Federation of Catholic Christian Women through St. Adelaide’s church in Highland, CA. where she often attended mass. Mary Ellen cherished being involved with the church and held a strong connection with and affinity for God, often letting others know that she was praying for them, while attending mass or taking Communion at home as often as her health would allow it. Mary Ellen loved to go on vacation. She loved to go to Mexico, with Cabo San Lucas being her favorite and most visited city. She loved spending time in the desert, including Palm Springs and La Quinta. She loved sunbathing but not swimming, she loved shopping but not getting rid of old things, she loved cooking but not the cleanup, and she loved desert-especially chocolate cake, but not the calories. Mary Ellen also enjoyed art and crafting in her later years, often showing an artistic talent she never fully indulged. While Mary Ellen’s health issues often held her back physically later in life from being as active as she wanted to be, her fighting spirit never waned, and she was not afraid to let you know her opinion if she felt strongly about something. Mary Ellen was a woman, a daughter, a sister, a wife, a mother, and a grandmother. Mary Ellen was also a leader and an administrator. At her essence, Mary Ellen loved her family and God immensely. Mary Ellen was loved very much and will be greatly missed by her family and friends.

Mary Ellen Samra, 77, of Yucaipa, California passed away from this life in Redlands, California on January 25th, 2021. Mary Ellen was born on March 18th, 1943 in Chicago, Illinois to Harold and Mary Jane Finnigan. She was preceded in death by... View Obituary & Service Information

The family of Mary Ellen Samra created this Life Tributes page to make it easy to share your memories.

Mary Ellen Samra, 77, of Yucaipa, California passed away from...

Send flowers to the Samra family.