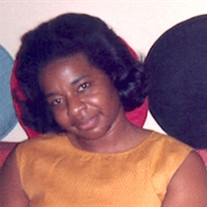 Mary Willetta Jones was born in Brirmingham Alabama on January 1st, 1933 to Clara D. and Jesse Jones. Her family moved to Bessemer Alabama where she attended Roosevelt School. After the death of her mother, she moved to Colony Alabama where she lived until her high school graduation from Colony School. She then returned to Bessemer, where she took on the responsibility of raising her two sisters, Gloria Jean, and Jessie Ann Joyce, whilst attending Miles College. After receiving her degree from college, she obtained a managerial position at Jazz & Music in Bessemer. Once both of her sisters graduated from high school, Mary moved to San Bernardino, California where she became licensed as a Vocational Nurse (L.V.N.), and Psychiatric Technician (L.P.T.). She worked at Patton State Hospital as a Shift Lead, working until she took early retirement. Not being one to sit still for long, she then worked for a short time at County Hospital in San Bernardino. Mary enjoyed her retirement, and spent her days, antiquing, gardening, sewing, and her greatest joy and love, helping to care for her nephew and nieces. Mary was born with the special gift of giving unconditionally of herself. She was the matriarch that held the family together, and was sought out by all family members for her wisdom, intelligence, skill, and love. She mended broken hearts, helped with scraped knees, made clothes, provided delicious meals, but most of all, showed love and compassion for all. Although, most of the time she sat quietly pondering all things said and done, giving her two cents when needed, wanted or not, she will be most fondly remembered for she infectious smile and her wonderful laughter. When something really tickled her, she would tilt her head to the sky, and howl with and open heart and wonderful smile, sharing her joy and happiness with us all. Mary Willetta Jones was preceded in death by her parents, Clara D. and Jesse Jones, on sister, Gloria Jean Cheatham, and one nephew, Michael Louis Bragg. She leaves to mourn her memory, one sister, Jessie Ann Joyce Daniel of Montclair, NJ, two nieces, Angela Contessa Daniel of Loma Linda, CA, and Judith Annette Hogan of Montclair, NJ, and many other relatives and friends.

Mary Willetta Jones was born in Brirmingham Alabama on January 1st, 1933 to Clara D. and Jesse Jones. Her family moved to Bessemer Alabama where she attended Roosevelt School. After the death of her mother, she moved to Colony Alabama where... View Obituary & Service Information

The family of Mrs Mary Willetta Jones created this Life Tributes page to make it easy to share your memories.

Mary Willetta Jones was born in Brirmingham Alabama on January...

Send flowers to the Jones family.