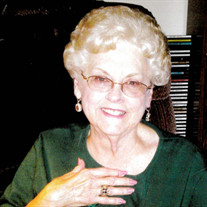 She was born Mary Sue Lear in Paducah, KY, on September 28, 1934. As a young girl, she moved to Detroit, MI with her parents, Norman and Bonnie, so that her father could work in the booming auto industry. She excelled in school, was a voracious reader, and one of her teachers provided free after school art classes when she noticed a talent there. Mary met her longtime friend, Jeannie Thompson, and they continued to call, write and text each other over the next 70 years until Jeannie’s passing last year. In high school, Mary met the love of her life, Leland Huff. He graduated and went off to Japan to serve in the Army for 2 years during the Korean War while Mary finished school and graduated as Valedictorian of the Class of 1952. She then took a secretarial position with the Superintendent of Schools for Detroit to save money for her wedding. In 1954, she had the wedding of her dreams to Leland at Temple Baptist Church in Detroit and he started his Bachelor and Master’s degree programs at Wayne State University. Along came daughter Lori in 1958, and the decision to move to California came to fruition in 1962. Leland moved first to accept a teaching position and find the family a house. Mary and Lori followed by train in December of that year- wearing heavy coats when they arrived to 90 degree Southern California weather! Mary had a second child, Craig, in 1964, and Mary’s parents made the move to California themselves. Eventually, Mary and her family moved to the north end of San Bernardino where the family home remains to this day. She loved her yard with flowers and fruit trees and became close to other stay-athome moms in the neighborhood. She was amazing at running the household and budgeting so that there was extra for voice and piano lessons, and became an amazing seamstress who sewed costumes for school plays, choral performances and even Lori’s Prom dresses. She and her family were always involved with the local church, often small ones which needed refurbishing (Riverside Baptist Temple) or donating needed items such an air conditioner (Bible Baptist Church). Mary and Lee served as Sunday School teachers and Youth Group chaperones. In 1980, Mary’s life changed drastically. The Panorama Fire struck in November of that year and she sustained a severe back injury trying to save the house- an injury that would plague her for the rest of her life. But being the tenacious person that she was, she started looking at architectural plans after release from the hospital because she wanted her family to have a home again. She promised Lori that it would be finished before her birthday in April, and it was! The loss of photos and other special memories broke her heart but she forged ahead. Lori finished law school and Craig his Master’s program at Loma Linda, and Mary was so excited to help both of them select their first homes and help furnish them. She was thrilled to help welcome her only grandchildren, Jared and Ashley, into this world in 2001. She loved to spend time with them and watch them grow into the beautiful Christian young adults which they’ve become. She always prayed for their safety and that the Lord would continue to lead in their lives. She was excited to hear about each of their plans for college, and was fortunate to spend one last Christmas with them. Last September, she celebrated her 85th birthday in Big Bear. She always loved the mountains the best, even though she and Lee had traveled to Europe, Canada, Alaska, Hawaii, and many other places in America. She never stopped missing Kentucky and all the memories she had from there. As an only child, she was a constant in her parents’ lives, and she stayed beside them every moment as they were passing. Her devotion to family was utmost to her, and although she loved those who are still living with all her heart, in her last days she said she wanted to go see her parents in Heaven. And that is how it should be . . . Mary entered Heaven’s gates on April 2, 2020.

She was born Mary Sue Lear in Paducah, KY, on September 28, 1934. As a young girl, she moved to Detroit, MI with her parents, Norman and Bonnie, so that her father could work in the booming auto industry. She excelled in school, was a voracious... View Obituary & Service Information

The family of Mary Sue Huff created this Life Tributes page to make it easy to share your memories.

Send flowers to the Huff family.