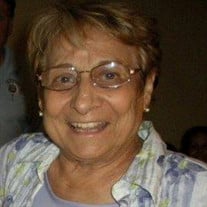 “Mary Ann Alvaro Chisholm was welcomed into Heaven on July 17, 2018 and waiting to embrace her once again were her loving husband, Toppy, parents, Vincent and Margaret Alvaro, siblings, Ellen Seymour, Rosemary Kamphaus, Anthony Alvaro and Rita Mikridge and her beloved grandson, Alex Chisholm. Mary left behind a grieving family, who remained by her side until it was time for her to leave. Her children, Mary Ellen Sexton, Richard & Viola Chisholm, Lois Chisholm, Susan & David Dillon were blessed to know her unconditional love and devotion. Her grandchildren, Christopher & Jenna Tourino, Daniel & Brianne Tourino, Nathan Chisholm, Nicholas & Annie Dillon knew, from the day they were born, that their grandmother adored them all and when her great-grandchildren, Mason Alexander Tourino and Makenna Rose Tourino were born in 2017 and early 2018, her heart burst with joy. Although she gave birth to only 4 children, she became a second mother to Carey Chenoski Wilson and Adele Calia Ray. Mary had a special relationship with all her nieces and nephews, near and far. A visit or phone call with “Auntie Mary” left each one with a smile on their face and love in their heart. Mary was born in Olyphant, PA on January 26, 1928 and moved to Southern California in 1953, where she soon met the love of her life, Toppy Chisholm, who she married on April 30, 1955, and to whom she was devoted until his death on July 21, 2009. Mary moved to Highland in 1961 with her husband and children and remained there until her death. Mary worked as a bookkeeper before starting a family. She enjoyed working, but her greatest love was her family. A funeral mass will be held on Saturday, July 28, 2018 at 12:30 PM at St. Adelaide Catholic Church, 27487 Baseline St. Highland, and following the service, she will be laid to rest at Montecito 3520 E. Washington Street, Colton, Ca. To leave a condolence online please visit www.bobbittchapel.com.

The family of Mary Ann Chisholm created this Life Tributes page to make it easy to share your memories.

“Mary Ann Alvaro Chisholm was welcomed into Heaven on July 17,...

Send flowers to the Chisholm family.