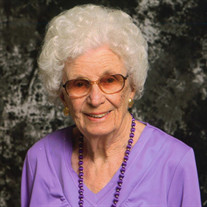 Marion was born Marion Nathalie Doenitz on November 16, 1918 in Summit, Illinois. Her parents were Clifford and Hannah Doenitz. Sadly, Hannah died in a car accident when Marion was only 16. Marion moved to California around 1945 and began working at the San Bernardino Sears store, originally on 3rd Street but which later moved to the Inland Center Mall. She worked in the Sporting Goods Department and sold guns, camping equipment, fishing gear, and was quite the expert in all things relating to sporting goods. She was the go-to person for other employees, even from other departments. If they had a question or needed help with something, she was always willing to help. Marion received numerous awards for her work at Sears, not only from the local store but received regional and national recognition as well. She received the Sears Citizen of the Year award for having the most outstanding record of work in welfare, civic, and community organizations. She worked at Sears for 35 years, retiring in 1981. Marion married Robert Jones in 1941. Several years later Robert passed away and in 1959 she married William (Bill) Schick. Bill was blind but led a very active life. He was involved with Valley Lighthouse for the Blind and enjoyed bowling and playing the guitar in a band which would play at nursing homes around town. He also helped remodel the home he and Marion shared. Marion was also involved with the Lighthouse for the Blind for many years and accompanied students on outings and assisted with various functions. In 1982 Bill passed away. Marion lived independently for several years and in 1994 she married Austin Stembridge. They especially enjoyed going to bingo several nights a week and were married for 14 years before Austin’s passing in 2008. She again lived independently in her own home, continuing to play bingo each week at the Knights of Columbus with her bingo buddies, and sharing her home with her cat Star. Marion was a member of Central Christian Church and attended there for over 20 years. She was also one of the original members of AARP Chapter 224. The group held weekly dances and Marion would take attendance and give a report each week of who had birthdays and other special occasions. The AARP chapter also recognized her for her years of service. Marion was a very generous and giving person. She used to buy candy and treats and hand them out to the neighborhood children as they walked by her house after school. Kids would line up outside her house to get a treat. She also brought bags full of snacks and candy and treats to her friends at bingo. She remembered who liked what and always tried to have things that they would like. She also brought a bowl full of candy to the AARP dances each week. Marion also supported several charities, such as St. Jude Children’s Hospital and the Salvation Army. She remembered the birthdays of everyone in the family and always made sure she had a card ready to send them along with a gift card or check. Marion had an incredible memory. She could provide details of things that happened long ago or give the recap of the latest Dodger game. If you took her somewhere, she could always tell you right where you parked your car, even if you didn’t remember. She could remember people, places, events, and dates, which always amazed everyone, especially at the age of 102. Many people commented to her that she didn’t look or act like someone 102 years old. She loved the Dodgers and was very happy they won the World Series last year. She was also a Lakers fan. And she loved cats. Not only did she take care of her own 2 cats, Star and Summer, but she also was concerned about the neighborhood cats and didn’t want them to go hungry, so she would buy extra food for them and feed them, too. Marion was a kind and wonderful person. She really appreciated those who showed kindness back to her, whether it was family or friends or more casual acquaintances like her favorite cashiers at Stater’s and the 99 Cent Store or her favorite waitresses at Denny’s and Pepper Steak, because of their friendliness and helpfulness toward her. She noticed those things and knew their names. Marion also had a good sense of humor and was fun to be around. Everyone who knew her loved her and she will be greatly missed. Marion passed away on June 7th in Loma Linda. A memorial service is planned for Saturday, June 19th, at Bobbitt Memorial Chapel at 10 am at 1299 E. Highland Ave., followed by a graveside service at Montecito Memorial Park at 11:30, 3520 E. Washington Street, in Colton. She is survived by her niece Bobbie Sharon Perong (husband Bill) of Colorado, two great nephews Christopher and David, four great-great nephews and nieces; step-daughter Joan Cismowski of San Bernardino, step-son Don (wife Nancy) of Penn Valley, granddaughter Kerry Cismowski (husband Gianni) of Utah; grandsons Ben (wife Lori) and Mike (wife Anna) of Texas, 5 great-grandchildren, niece Beverly Swanson of San Bernardino, nephew David Swanson of El Cajon, and of course her cats, Star and Summer. If anyone would like to make a donation in her honor, donations can be made to the Inland Empire Lighthouse for the Blind (359 Parkcenter Circle, San Bernardino, CA 92408), an organization that was very special to Marion.

Marion was born Marion Nathalie Doenitz on November 16, 1918 in Summit, Illinois. Her parents were Clifford and Hannah Doenitz. Sadly, Hannah died in a car accident when Marion was only 16. Marion moved to California around 1945 and began... View Obituary & Service Information

The family of Marion Nathalie Schick created this Life Tributes page to make it easy to share your memories.

Send flowers to the Schick family.