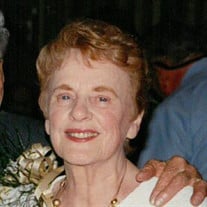 Marion K. Burgess, 93, passed away peacefully on Friday, July 24, 2015, in Winchester, CA. She was born December 30, 1921, to John M. McEwan and Mary S. McEwan, in Glasgow Scotland. Marion was preceded in death by her beloved husband, William “Bill” Burgess. She is survived by her daughter Sheila M. Toomey, grandchildren, Scott Turbeville(Brenda), Tracy Lynn Turbeville, and Greg Turbeville(Renee), and great grandchildren, Devin, Madison, and Derek. Marion arrived in the USA on the Queen Mary in 1946, and in 1947, Marion and Bill settled permanently in San Bernardino. Marion was an avid reader, a member of the British Tea Set, and was a committed volunteer with the St. Bernardine Medical Center Auxiliary for 26 years, becoming an Honorary Life Member. Heartfelt thanks go out to the Caregivers at Mercy Home of Winchester, CA and VNA of Murrieta Hospice for making Marion comfortable during the final journey of her life. There will be a memorial service at the First Presbyterian Church of San Bernardino on August 29, 2015 at 11:00 am.

The family of Marion K Burgess created this Life Tributes page to make it easy to share your memories.

Send flowers to the Burgess family.