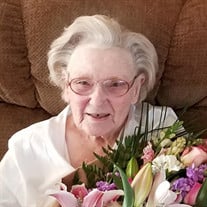 Geneva, the name everyone knew her by, was 93 years old and passed in peace in Port Angeles, Washington on July 23, 2018. She is survived by her Son, David E. Jones (Helen), Daughter, Terri J. Watson (Bob), Seven Grandchildren: Tim Taylor, Christine Abbott, Paul Jones, Bailee Watson, Katie-Grace Johnson, Jessica Eck, and Josiah Eck. Seven Great Grandchildren: Heather Mitchell, Britnee Davis, Dani Taylor, Bradley Taylor, Frankie Abbott, Jack Jones, and Madison Jones. She also had one Great-Great Grandson, Luke and another on the way. Her oldest daughter, Rosalie June Taylor preceded Geneva in death in November of 2016. A Viewing will be held on August 2, 2018 5-7pm (Family 4-7pm) with Services on August 3, 2018 at 1:00 pm at Bobbitt Memorial Chapel. Graveside services will follow at Montecito Memorial Park. Geneva was born to Henry and Viola Reynolds on November 7th, 1924, in the township of Eaglette located in Dallas County, Arkansas. She was the last surviving sibling of three sisters and four brothers. She worked in a Rocket Factory to support the War effort. All three of her surviving brothers were in WW2, and all three came home much to the delight of Geneva and her family. Geneva came to California in late 1945 and married Walter “Buck” Jones on January 13, 1946. Buck and Geneva raised three children while both working full time. She worked over 25 years as a Psychiatric Technician at Patton State Hospital in San Bernardino, California. Both she and Buck retired to the quiet little town of Lucerne at Clearlake, California in 1976. They spent 26 wonderful years there enjoying retirement. She loved to cook, bake, fish, garden, watch football (Go 49ers!), spend Saturdays at yard sales, travel in their 5th wheel, from Arkansas to Klamath to “down south” (southern California) to see all the kids. They returned to Southern California in 2002 due to health issues and to be near the kids. They lived in Cedarpines Park for many years. She enjoyed mountain living and made great friends with all their neighbors. Buck passed away in October of 2010, and Geneva moved to Washington State in 2017 to live with her daughter, Terri and family. She was a dedicated and loving Wife, Mother and Grandmother. She will be missed greatly and we look to the day when we will be with her again in the presence of our Lord Jesus Christ. We love you, Mom!!

The family of Margarette Jones created this Life Tributes page to make it easy to share your memories.

Geneva, the name everyone knew her by, was 93 years old and passed...

Send flowers to the Jones family.