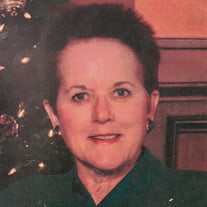 Margaret Ruth (Fox) Burnett "Peggy" passed away peacefully at her home in San Bernardino, California on September 9th, 2016. She was born in Wilkes Barre, Pennslyvania, to William and Alma Fox. She was a registered nurse at Patton State hospital for 38 years before she retired in 2004. In 1961 Peggy graduated from James M. Coughlin High School. Immediately after graduating high school, Margaret enlisted in the U.S. Marine Corps and never looked back. After completing boot camp she was assigned to the Fleet Marine Forces Atlantic Command in Norfolk, VA. Upon completion of her active service obligation Margaret packed her bags and bought a one way ticket to sunny southern California, where she resided until her passing. She continued to serve in the reserve component of the U.S. Marine Corps and attended San Bernardino Valley College where she earned an associate’s degree in nursing in 1970. During her time in Norfolk, VA she served as the secretary to the Commander of the Atlantic Fleet. Many people knew Margaret as Peggy, however, not many people knew the story of how she acquired the moniker Peggy. When she reported for duty the Commanding General, her new boss, asked her how she wanted to be addressed to which she replied "Private Fox, Sir!" His reply- "Sounds good, Peggy." The name stayed with her from that day on. After moving to California, Margaret joined a Marine Corps Reserve unit located in San Bernardino. She was the only female Marine in her unit which garnered her special attention from her male counterparts. It was with these Marines that Margaret completed the first of many airborne parachute jumps. She was a natural at jumping out of a perfectly good aircraft and falling back to earth under the canopy of a parachute made by the lowest bidder. Shortly after she left the Marine Corps her reserve unit was ordered to service in Vietnam and many of her fellow Marines did not return home alive. She spent the rest of her life honoring their sacrifice thru her support of multiple veterans organizations. Margaret loved the U.S. Marine Corps and was extremely proud of her service! If you truly knew Margaret you knew that she loved, really loved, to do three things: Travel, dance and take pictures. From the time she was a small child she told anyone who asked that she wanted to see the world. At the time of her passing, Margaret visited (and danced in) over 60 countries, touched foot on all 7 continents and had the photos and stories to prove it. Without fail, she was always able to convince some young gentleman to join her on the dance floor, if only to stand there and watch her cut a rug. Margaret was one of the few who did dance like no one was watching. Her camera was never far from her reach. She photo-documented everything from the mundane to the extraordinary. She captured life thru the lens and shared it with everyone. Every photo had a story that helped bring the picture to life, and her ability to capture life as it happened was exceptional. She was an award winning photographer whose work was featured in magazines, museums and galleries throughout the United States including the Smithsonian Museum of American History. Margaret always professed that she would be famous posthumously, but based on all of her awards and write-ups it is safe to say that she achieved that milestone well before her passing. Service to community and society were at the core of who Margaret truly was. She participated in dozens of Earthwatch and Global Volunteers trips throughout the world. She taught English in the Cook Islands, studied Cheetahs in Africa, Leatherback turtles in Costa Rica and pollution in Kenya to name just a few. She felt that her purpose on earth was to make the greatest contribution possible thru service, dialog and action. She always maintained that people should be the change they want to see in society. Service was Margaret's ethos. She never met an ice cream she didn't like and could read a dessert menu in 37 different languages. She was not afraid to sample anything; from food to life she tried it all! She was courageous beyond measure. She strove every day to be the change she wanted to see in society and even though she fell short some days she never stopped trying. She was a true steward of the earth. In life you meet people who make an impression on you and then you meet people who leave a mark on society. Without question, Margaret left her mark! In lieu of flowers or cards please consider volunteering in your community or making a donation to an organization of your choosing. Peggy is survived by: daughter Myla Burnett, and son Jason (Kendra) Burnett. Step-children: Terri (Milton) Blackburn, Cynthia Burnett-Smith, Wayne (Becki Worley) Burnett Jr. Grandchildren: Cyera (Ulises) Villages, Jesse Boone, Jeffrey Jones II; Sheldon, Claire and Tobias Burnett; Cheree Thomas, Joshua Burnett and Brandon Blackburn; Larissa Lucas; Kedar Smith; Tela (Hauns) Bereton and Roland (Laura) Burnett; great-grandchildren: Eddie and Anissa Boone; Heavenly and Tai Newels; Kaylub, Jordan and AJ Burnett; Mia, Jordyn and Hailey Blackburn; Duncan Burnett; siblings: Richard Fox, David Fox and Sharon (Robert) DiGuisto; sister-in-law Alberta Fox and a host of nieces and nephews. Peggy was preceded in death by her parents William and Alma Fox, brother Kenneth Fox, sisters Florence Fox Mylott, and Diane Fox, step-daughter Stephanie Burnett Lucas, and great-granddaughter Reazhane Boone; and ex-husband, Wayne Burnett, Sr.

Margaret Ruth (Fox) Burnett "Peggy" passed away peacefully at her home in San Bernardino, California on September 9th, 2016. She was born in Wilkes Barre, Pennslyvania, to William and Alma Fox. She was a registered nurse at Patton State hospital... View Obituary & Service Information

The family of Margaret Ruth Burnett created this Life Tributes page to make it easy to share your memories.

Send flowers to the Burnett family.