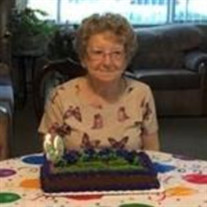 IN LOVING MEMORY OF LORRAINE MARIE LAWYER July 6, 1930 – December 28, 2021 Lorraine Marie Lawyer, 91, of San Bernardino, California passed away on December 28, 2021. She was born on July 6, 1930 to parents Robert and Marie Garrity, in Hartford, CN. She was raised in Connecticut moving to California as an adult. At the young age of 8 years old Lorraine suffered the loss of her father. She along with her mother and two sisters moved in to live with her maternal grandmother. It is during these early years Lorraine took on responsibility to help care for her younger siblings. After graduation from high school in 1948, Lorraine worked in an insurance office. True to her nature she assisted her sister in securing a position in the insurance office alongside of her. Lorraine met her husband Thornton (Tom) Lawyer while he was on leave from the Navy. Lorraine and Tom were married November 17, 1951, in a beautiful catholic church service. They settled in Virginia Beach, VA to be closer to the Naval Base. Their first son Stephen was born in 1952 and they remained in Virginia Beach until Tom was honorably discharged from the Navy in 1954. Soon afterwards they returned to Hartford, CN to be close to her family. They were blessed with three more children, Gregory, Thomas and Dawn. The young family moved to California in 1964 to care for Lorraine’s mother whom had been diagnosed with cancer. Lorraine remained faithfully by her mother’s side serving as her caregiver while caring for her own four young children. Tom and Lorraine took great pride in the purchase of their first home in San Bernardino. Always dutifully aware of caring for their family, Tom worked daytime as a mechanic and she worked evenings as a waitress. She began her first waitressing job at the NCO Club at Norton AFB. Later she worked at the Mediterranean, Open Hearth and the Castaway Restaurants. Lorraine was an excellent waitress with her quick wit and ability to anticipating customer’s needs. They remained in their home where they raised their family until Tom’s death in November, 2004, followed by son Greg in May 2018, and Lorraine passed in December, 2021. Tom and Lorraine celebrated 53 years of marriage together. Lorraine was a remarkable woman. She presided over her family holding everyone together, supporting our ideas, our dreams and always a gentle listening ear or shoulder to cry on. She celebrated our successes and supported us through our life struggles. She was ready to be of help in any way she could. She was the epitome of the family matriarch. A devoted mother, grandmother and great grandmother. She touched all of our lives with her wisdom, meals and practical commonsense solutions. Lorraine never forgot a birthday or holiday remembering to send cards to each family member. Lorraine fought a good fight to come back after a serious fall, subsequent surgery and numerous strokes. She proved to be stronger than anyone ever imagined. In the early morning hours of December 28th in accordance to God’s plan He gently took Lorraine in His arms telling her your job on earth is done. It is now time for her to come home to live with Him in Heaven. Lorraine, you will be eternally missed. Our hearts will always carry the memory of you. Lorraine is survived by her sons Steve (Roxie) and Tommy Lawyer, daughter Dawn Lawyer; granddaughters Jennifer (Homer) Limon, Amber (Eli) Brink, Courtney Adamczyk and Lindsey Lawyer; grandsons Greg (Chastity) Lawyer Jr, Zach and Jesse Lawyer; great granddaughters Lilian, Myia and Jewel Brink and Alyssa Limon; great grandsons Tyler Julian, Greg Lawyer III, Ethan Limon, Sage Alvarez and her two sisters Jeanne Davis and Nancy Anselmo. Lorraine will be laid to rest alongside her husband on Tuesday, January 25th, 1:00 pm at Riverside National Cemetery. In lieu of flowers, the family requests donations to be made to St. Jude Children’s Research Hospital.

The family of Lorraine Marie Lawyer created this Life Tributes page to make it easy to share your memories.

Send flowers to the Lawyer family.