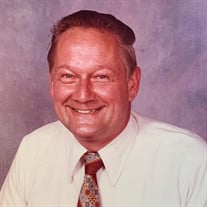 Laddie V. Kosmal 86 of Highland, CA entered into eternal rest on March 24, 2020, at his home with his sons by his side. Loving father of Debra (Dan) Brown, Alan (Donna), Denise Richards and David. He was preceded in death by his beloved wife Shirley (nee: Kepner), daughters Karen and Kathleen, three brothers and two sisters. Dear brother of Dorothy McKee; loving grandfather of eight and great grandfather of six; fond uncle of many nieces and nephews. Laddie was a man of principals, working diligently to provide for his wife and six children. He was meticulous for keeping track of the details and numbers. He believed in hard work and keeping your word. He was a dedicated husband to his wife Shirley, loving and caring for her at their home as she passed away from cancer in 2013. A man who loved his country and served in the Air Force during the Korean War as a pharmacist until his honorable discharge in 1957; he then obtained his Bachelor of Science in Pharmacy in 1961 from the University of Illinois. Laddie worked as a pharmacist for 38 Years, retiring from Kaiser after 23 years in 1999. He loved numbers and after retiring was able to spend more time playing Keno, growing a large variety of tomatoes, and attending air shows. Due to recent limitations of funeral services, a small private graveside service will be held as we lay Laddie to rest. We will have a Facebook Live during the service for all who wish to view the services on April 13, 2020, at 10:30 a.m. He believed strongly in giving to those committed to Christ and those who help others. His giving has helped reach out to people through donations to his church, our veterans, St Jude, and the Association Of The Miraculous Medal, where you will see his wife Shirley’s engraved stone in front of the Grotto of Mother Mary. In lieu of flowers, donations can be made in Laddie’s honor to the Association of The Miraculous Medal, or a charity of your choice. Condolences may be left for the family at www.bobbittchapel.com Now, reunited in heaven with his beloved wife Shirley, and daughters Karen and Kathleen who passed before him. “My soul glorifies the Lord and my spirit rejoices in God my Savior“ -Mary (Luke 1:46b-47, NIV)

Laddie V. Kosmal 86 of Highland, CA entered into eternal rest on March 24, 2020, at his home with his sons by his side. Loving father of Debra (Dan) Brown, Alan (Donna), Denise Richards and David. He was preceded in death by his beloved wife... View Obituary & Service Information

The family of Laddie Valentine Kosmal created this Life Tributes page to make it easy to share your memories.

Send flowers to the Kosmal family.