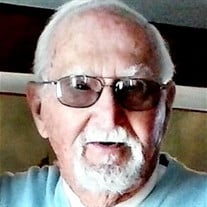 Kenneth J. Coker passed away on Wednesday, September 20, 2017, aged 90. Ken was born in Van Zandt County, Texas. His family moved to California in 1931. He attended San Bernardino High School, leaving his senior year to join the United States Coast Guard, where he served honorably in the South Pacific aboard the USS Cavalier (APA 37) from 1945 to 1946. In 1947, Ken joined Western Electric, the main supplier for AT&T. He attended San Bernardino Valley College in 1948, before joining the Coca-Cola Bottling Company, from which he retired 38 years later. In 1950, he married his sweetheart, Patricia R. Cooper. They were married for 56 years, until Patricia’s death in 2007. The couple were blessed with four sons. Ken was an avid skier and worked for several years as an instructor at Snow Valley in Running Springs, California. Along with his older brother, Virgil, he was a free flight model airplane enthusiast, placing in Southern California competitions. Ken is survived by his sons, Peter, Mark, Matthew, and Brett; daughters-in-law, Ivy, Bobbie, Jodi, and Shawn; grandchildren, Jason, Ian, Dustin, Adam, and Emily; and eight great-grandchildren. Ken also leaves behind many dear relatives and lifelong friends. All are thankful for the time they shared with Ken and will miss him dearly. Committal services will be 10:01 a.m., Friday, Sept. 29, 2017 at Riverside National Cemetery, 22495 Van Buren Blvd., Riverside, CA.

The family of Kenneth J Coker created this Life Tributes page to make it easy to share your memories.

Send flowers to the Coker family.