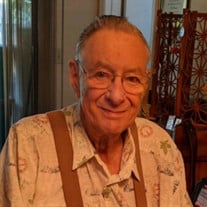 Lt. Col. Karl P. Kraemer, USAF retired, went from this earth to join Audrée, his wife of 55 years, on Sunday, November 7, 2021. Karl was born on August 3, 1933, in Des Moines, IA, only child of Karl F. and Thelma (Dawson) Kraemer. The family moved to Omaha, NB when Karl was one year old. Karl attended grade school in Omaha except for two years when the family was temporarily in Chicago due to his father’s work with Western Electric Co. during WWII. After his freshman year at Tech High in Omaha, the family moved to Minneapolis, MN, where Karl finished high school at Roosevelt High. He then attended the University of Minnesota, graduating in 1955 and receiving his commission as a Second Lieutenant in the Air Force. Karl entered the Air Force in January, 1956, attended flight school at Malden AFB, MO and Vance AFB, OK, receiving his wings as an Air Force pilot in June 1957. His first assignment was Dover AFB, DE, piloting C-124 transport planes. He met Audrée, who was attending Georgetown University School of Nursing, on a blind date that summer. Karl’s flying duties took him to Europe and throughout North America. After Audrée’s graduation in 1959, they were married on October 31. In June 1961 Karl was transferred to Tachikawa Air Base, Japan to fly HC-54s with the Air Rescue Service. The couple’s first daughter, Patricia Ann, was born in Japan in September. After a three-year tour Karl was assigned to Robins AFB, GA, again flying C-124 aircraft. The primary mission at Robins was transporting nuclear weapons and their components throughout the world. The squadron upgraded to the C-141 jet aircraft in 1966 with the added mission of airdropping troops and cargo as needed. Many flights were made to Viet Nam. Two more daughters, Diane Marie and Kathleen Elizabeth, were added to the family in 1968. In 1970, Karl was scheduled to serve Viet Nam as a forward air controller, but his assignment was changed to Thule Air Base, Greenland. The temperature on his arrival was 32 degrees below zero. Thule was an isolated tour without families, but fortunately he only had to serve 8 months of the scheduled 12. The next assignment was Norton AFB, CA, back to C-141s. By this time Karl was a Lt. Col. and became Chief of Combat Tactics, in charge of the airdrop program at the wing headquarters. In January, 1976 after 20 years and nearly 10,000 pilot flying hours, he retired from the Air Force. Karl then attended Western State University of Law in Fullerton, CA, graduating cum laude in 1979, passing the California bar exam on his first effort. He was in private practice mainly in family law until 1985, when he joined the law firm of Jacoby and Meyers, still mostly practicing family law from offices in Riverside and San Bernardino. He eventually became a partner, then retired from law in 1995. The first 12 months after retirement were spent on the San Bernardino Grand Jury. Karl was an active member and officer of the local chapter Military Officers Association of America and the order of Daedalians, the national fraternity of military pilots. He was a regular lector at St. Adelaide Catholic Church, starting in 1976 and continuing for 40 years. Karl and Audrée enjoyed retirement by doing quite a bit of traveling. This included trips to Boston and Washington, DC for Audrée’s home and college reunions. They attended reunions for Daedalians and Air Rescue Service at various US cities. One favorite activity was cruising; they managed some 24 big ship cruises throughout Europe, Asia, Alaska, and the Caribbean, and 8 river cruises in Europe. They made numerous trips to Hawaii and went on four European land tours. The joint traveling came to an end with Audrée’s unfortunate passing in July, 2015. Memorial contributions may be made to Flight 30, Order of Daedalians Scholarship Fund (PO Box 6235 March ARB, CA) or Orange Empire Retired Officers Club Scholarship Fund (PO Box 543 Highland, CA).

The family of Karl Paul Kraemer created this Life Tributes page to make it easy to share your memories.

Send flowers to the Kraemer family.