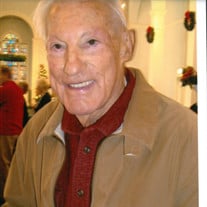 Joseph A. Hayes, 87, passed away in Highland, CA, on July 21, 2016, surrounded by his family. Originally from Rolla, MO, Joseph graduated from Vienna High School class of '47. He attended Warrensburg State Teacher’s College during the summer of '47 and then taught at the Tennesyn Elementary School in Vichy, MO, from '47-'48. In 1948, Joe enlisted in the United States Air Force. During his time in the Air Force, he was stationed at various bases within the United States, including Alaska and Hawaii; although most of his time was spent in Southern California. After 21 years of honorable service, Joe retired with the rank of MSGT. He then began his second successful career as a Real Estate Agent and Broker; opening two of his own real estate offices. Later, he worked as the Secretary/Treasurer of several Masonic organizations. He also volunteered at local senior centers, where he helped people do their taxes. Joe was well known for always being a hard worker and it would be impossible to list all of his achievements! In late 1949, fate placed him in the only available seat on a long-distance bus ride where he met Betty LaRue Hicks. They were married shortly thereafter and remained married until her passing in 2013. Together they had four daughters; Suzanne, Sandra, Sharon, and Sylvia. Their greatest joy in life was family! As a family, they loved to travel throughout the United States and especially enjoyed visiting State and National Parks. Joe and Betty continued travelling until their passing; enjoying many vacations and cruises. He was a Master Mason - Blue Lodge of San Bernardino, the Scottish Rite, York Rite, The Shriners, Past Watchman of Shepherd of the White Shrine of Jerusalem, Past Associate President of State White Shrine for California, Past Patron of Gate City Order of The Eastern Star, and Past Grand Royal Patron of California Order of Amaranth. He was also a longtime member of Highland Congregational Church. He was preceded in death by his wife Betty and his youngest daughter Sylvia. He is survived by his daughters, Suzanne (Jerry) of Highland, CA, Sandra (Jay) of Sacramento, CA, Sharon of Highland, CA; his five grandchildren Gerald Hicks, Rodney and Jedediah Irvine, Jessica Lara and Jacqueline Pacheco; and his twelve great-grandchildren. Also surviving him are his brother Johnny Hayes and his sister Bertha West.

Joseph A. Hayes, 87, passed away in Highland, CA, on July 21, 2016, surrounded by his family. Originally from Rolla, MO, Joseph graduated from Vienna High School class of '47. He attended Warrensburg State Teacher&#8217;s College during the... View Obituary & Service Information

The family of Mr Joseph A. Hayes created this Life Tributes page to make it easy to share your memories.

Send flowers to the Hayes family.