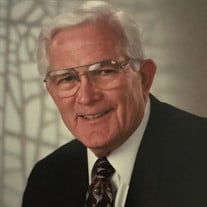 John J. Swartz Jr. 86, of Highland, CA, went home to be with the Lord on February 3, 2017. Born in Dallas, Texas to John and Lulu Swartz, John graduated from Forest Avenue High School – Class of ’48. He enlisted in the United States Army and served one year before attending Rice University of Houston. In 1950 John’s Army Reserve unit was called to active duty during the Korean War. It was during this time that John converted to Christianity on board the USS Woodford on Dec 7, 1951, after reading many related scriptures as suggested in a Gideon New Testament. He was honorably discharged in 1952 having achieved the rank of Sergeant First Class. He returned to school and graduated from Southwest Baptist Theological Seminary in Ft Worth, TX. He received a Bachelor of Divinity Degree in 1959. He also received a Masters of Religious Education Degree in 1960 and a Masters of Divinity in 1973. John completed all the seminars and field work toward his Doctor of Ministry Degree. He finally received an Honorary Doctor of Divinity Degree from California Southern Baptist College in 1981. John met Carol Wasson of Eagle Rock, California in the fall of 1953 and they were married on August 17, 1954. Together they had five sons, John Mark, Stephen, Joel, Michael, and Eric. They were then blessed with 18 grandchildren and more recently 4 great grandchildren. He has left behind a wonderful legacy. John served various churches throughout his ministry; Trinity Baptist Church in Texas; North Center Southern Baptist Church in Minneapolis, Minnesota; Memorial Baptist Church in Missouri and Bethel Southern Baptist Church in Escondido, California, where he served for almost thirty years. His final position was at Immanuel Baptist Church in Highland, California where he had been their Minister to Senior Adults for his final ten years of ministry. He held various positions within the Baptist Associations, most recently he was the President of the California Baptist Foundation and President of the Southern Baptist General Convention of California. He was also active in the community and served as the President of Escondido Ministerial Association, Chaplain of Escondido Police Department and a member of Hidden Valley Kiwanis Club. In his youth, John was an avid football and baseball player and later in life he enjoyed watching both. After his faith, his greatest joy was his family. In lieu of flowers, please make donations in John’s memory to Immanuel Baptist - Mission Fund at the address listed above.

The family of Mr. John Joseph Swartz created this Life Tributes page to make it easy to share your memories.

Send flowers to the Swartz family.