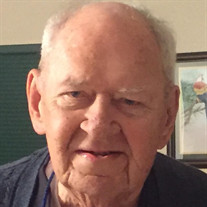 Shortly after reaching the age of 90, long-time resident of San Bernardino, CA, John C. Smith passed away in the early morning hours of Monday, June 19, 2017. Born the son of a coal miner in Johnstown PA, John volunteered for the military at age 17- during the final year of WWII. His service in the US Air Force spanned the Korean and the Vietnam wars and continued in civil service until he retired 45 years later. His career saw his family move from Germany to Pennsylvania, Northern Italy, Colorado Springs, Washington State, and finally to San Bernardino where he ultimately retired. He loved jazz, classical music, and opera and started many a Saturday and Sunday mornings with Brubeck, Verdi, Chopin, and many others playing on his stereo. As his wife had before she passed, John loved to watch his grandchildren play ice hockey, baseball, and softball and he was often the designated “team grandpa”. John was an educated man who never stopped learning and could hold his own on most any subject. He had the reputation of never having met a stranger and would engage anyone anywhere in conversation- sometimes in different languages. He worked hard; loved his family and friends; was a man of character and substance. John leaves behind a legacy of gratitude, love, and admiration for a life well lived. He made a difference and he will be missed. John was preceded in death by his wife of 49 years, Melba. He is survived by his close companion, Laura June, his son, Craig (wife Laurie), his two daughters, Sandra (husband Mark), and Tracey, all of San Bernardino and daughter Liz, of Kissimmee, Florida; grandchildren Jonathan, Adam, Sean, Connor, Trinity, and Tyler, great-grandson, Blake and his caring family in Pennsylvania- three brothers, two sisters, sister-in-law, and many nieces and nephews. His remains will be inurned alongside his wife at Riverside National Cemetery with full military honors at a date and time yet to be determined.

Shortly after reaching the age of 90, long-time resident of San Bernardino, CA, John C. Smith passed away in the early morning hours of Monday, June 19, 2017. Born the son of a coal miner in Johnstown PA, John volunteered for the military... View Obituary & Service Information

The family of Mr. John Clement Smith created this Life Tributes page to make it easy to share your memories.

Shortly after reaching the age of 90, long-time resident of San...

Send flowers to the Smith family.