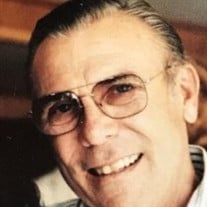 John Norman Broholm passed away, surrounded by his loved ones, on January 16, 2022 at Summerfield Place of Redlands. John was born in Evanston, Ill and as an infant moved with his family to Chicago where he lived until age 11. He moved with his mother, sister and grandparents to San Bernardino CA, where he made lifelong friendships and met the love of his life, Alice Nunez. He was a graduate of San Bernardino High School in 1955. He earned his Associates Degree from Valley College and completed the Machinist Apprentice program at Kaiser Steel Corporation in July 1961. John was with Kaiser for 16 years. He then went to work for Riverside Cement for 3 years, then was offered a program management position with McGuire company where he worked for 6 years. John opened his own business in 1980, John’s Machine Shop in Fontana where he employed his two sons and many family members. John sold his shop in 2009 when he retired to enjoy life with Alice and travel. In his youth John enjoyed playing football at San Bernardino High School where he was known as Bruisin Broholm. He loved playing slow pitch, and bowling on various work sponsored teams. He loved taking his kids and their friends on hiking trips up to San Gorgonio and loved being with his family at the beach. John married Alice Nunez in 1956. They were planning to celebrate their sixty six wedding anniversary January 29, 2022. They had four children, John Michael, Norman Martin, Veronica Sharp and Leticia Christian who have all stayed very close and loved him greatly. In addition, John leaves behind his sister Susan Hamilton, and a friend and son-in-law Alan Sharp as well as son-in-law Brad Christian. John will also be greatly missed by 7 grandchildern, Jerrod Broholm, Valerie Amis, Phillip and Melissa Broholm, Julia and Shelby Donley, Andrew Sharp, Ian Sharp, and Erik and Anna Sharp. He also leaves four great grandchildren, Eli and Gabriel Amis and Jacob and Josephine Broholm. I thank Thee for recurrent dawns, for many stars, for many snows, and for the shining unknown bird that comes a single time, and goes. Jane Merchant Services will be held at Bobbitt Memorial Chapel at 1299 Highland Avenue, San Bernardino, Saturday, February 12 at 10:00am. Immediately following will be a celebration of life at Shandin Hills Golf Club.

John Norman Broholm passed away, surrounded by his loved ones, on January 16, 2022 at Summerfield Place of Redlands. John was born in Evanston, Ill and as an infant moved with his family to Chicago where he lived until age 11. He moved with... View Obituary & Service Information

The family of John N. Broholm created this Life Tributes page to make it easy to share your memories.

John Norman Broholm passed away, surrounded by his loved ones,...

Send flowers to the Broholm family.