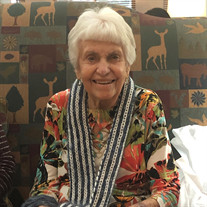 On Thursday, March 4, 2021, Joan Martin, loving wife, mother, darling grandmother and GG to seven great-grandchildren, passed away at the age of 92. Joan was born on February 5, 1929 in Alhambra,California to Norman and Edna Lochemes. She had one sister, Barbara Lochemes. On June 7, 1951, she married Philipp Brooks Martin. They raised two daughters, Frosty and Wendy. She worked for the Desert Inn as a bookkeeper and as an administrative assistant for Granada Hills Hospital. Joan had a passion for reading and sports. She also loved to volunteer whenever she could at the local library which allowed her to combine two of her favorite hobbies. She had quite the sweet tooth and loved her candy. See’s Candy was always around when you were with Joan. She loved to read and this passion was passed down to her daughter Frosty who has quite an extensive library of books. Joan was a dedicated grandmother and great-grandmother. She had four grandchildren, Jennifer, Jaime, Andrew, and Adam. She was well loved by her grandchildren and she understood how important they were to her. She also made sure they knew how important she was as she was to be called not just grandma, but Darling Grandma. Joan was always willing to sit and talk about sports and she loved to watch the NBA and listen to Charles Barkley. She was an avid Lakers fan and was always up to date on who was playing in the NBA Finals, the Super Bowl, or the major golf tournaments of the year. Joan was a great-grandmother to seven children, James, Noah, Brooklyn, Lily, Charlie-Rose, Isabella, and Nathan. Her role as great-grandmother was just as influential to these children and prompted the nickname GG for all to call her. Many people who spent time with Joan were treated like she was their GG even when they were not blood related. She had such a warm and loving personality and could make you feel right at home wherever you were. She was preceded in glory by her father, mother, husband, sister, and son-in-law Frederick Welker. She is survived by her daughter Frosty, her son-in -law Phil, her daughter Wendy, her grand children Jennifer, Jaime, Andrew, and Adam, and her great-grandchildren James, Noah, Brookly, Lily, Charlie-Rose, Isabella, and Nathan. There will be a private celebration of her life in May of 2021

On Thursday, March 4, 2021, Joan Martin, loving wife, mother, darling grandmother and GG to seven great-grandchildren, passed away at the age of 92. Joan was born on February 5, 1929 in Alhambra,California to Norman and Edna Lochemes. She had... View Obituary & Service Information

The family of Joan Martin created this Life Tributes page to make it easy to share your memories.

Send flowers to the Martin family.