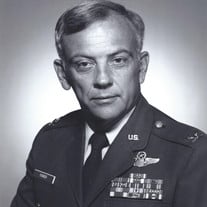 Col. Jey E. Younger III, Ret. November 13, 1941 - January 24, 2017. Jey grew up in San Marcos, Texas, and as a STSU Alum, he enlisted in the USAF in 1963. Serving in Vietnam, he was a Strategic Bomber Pilot and earned the Bronze Star, among many other medals. Jey and his first wife were blessed with a son, Dana, born 1969. He was very proud of his son and all of his family. While stationed at Norton AFB, he met the love of his life, Maggie. They were married 35 years until she passed away in 2016. He also had a second career as a reputable Real Estate Appraiser. Jey enjoyed golf, cruises, Silver Dollar Club, Steak Club jokes, Foot Printers, red wine, Maggie's turkey soup, swimming in his pool, and his Texas roots! A heartfelt thank-you to JoJo Hautz for all of her care of both Jey and Maggie. Saturday, March 4th at 1:00 P.M. at American Legion Post 777, 194 E. 40th Street, San Bernardino. In lieu of flowers, please donate to: The Childhood Cancer Foundation, c/o Mr. Jim Ott, 37110 Oak View Road, Yucaipa, CA 92399.

The family of Col. Jey Emerson Younger III created this Life Tributes page to make it easy to share your memories.

Send flowers to the Younger family.