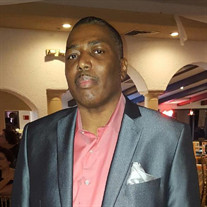 Jerome Harden, 49, died on Thursday, December 29, 2016 in Loma Linda University Medical Center in Loma Linda, CA. He was born on October 3, 1967 in Fairfield, CA to Henry and Daisy (Robinson) Harden. Jerome graduated from Eisenhower High School in Rialto, CA. He joined the United States Air Force in 1986 and he was honorably discharged in 1990. In 1991, Jerome attended Richard's Beauty College in San Bernardino, CA, and upon completion, he worked as a hair stylist and managed a Regis Hair Salon for several years. In 1990, Jerome decided to pursue his life-long dream of becoming a chef. He attended culinary classes at Chaffey College and began his culinary career. At the time of his death, Jerome worked as a chef for the Hyatt Regency Orange County, where he was well-loved and respected by his coworkers and friends. Jerome is survived by his parents Henry and Daisy Harden, his sister Veronica (Michael) Ryan, his sister Erika Harden, and his nieces Reilly Ryan, Savannah Harden, Alexandra Russell, and Rowan Ryan, his Grandmother Lola Oliver, aunts, an uncle, and a host of cousins. A visitation will be held at Bobbitt Memorial Chapel from 5:00 pm to 7:00 pm on January 16, 2017. Funeral services will be held at Bobbitt Memorial Chapel, 1299 E. Highland Ave. San Bernardino, CA at 9:30 am on January 17, 2017. The burial will follow at Riverside National Cemetery, and a repast in honor of Jerome's memory will take place at 12:45 pm at VFW Post 8547, 22616 Alessandro Blvd. Moreno Valley, CA 92553.

The family of Mr Jerome Harden created this Life Tributes page to make it easy to share your memories.

Send flowers to the Harden family.