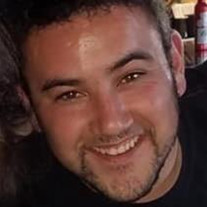 Jeremy Sornson, Born April 15, 1989, at the Naval Hospital at Camp Pendleton, California and Passed Away on October 24, 2019. Jeremy is survived by his two daughters, Sophia and Brianna; Sister, Amanda Castaneda; Parents Tina and Robert Hargett; Grandparents, Arturo and Mary Arellano; Mother of his children, Alexandra Sornson; Sister-In-Law and Brothers-In-Law, Aunts, Uncles, Cousins, many friends and loved ones. Jeremy attended Alta Loma High School and received his general education diploma and then enlisted in the United States Army. Jeremy served 7 years in the Army as an Infantryman (11 Bravo) from April, 2008, until September, 2015. He was assigned to Charlie Company, 2-28th Infantry Battalion, 172nd Infantry Brigade in Grafenwoeher, Germany. He was deployed to Iraq with the 2-28th in December, 2008, through December, 2009, for Operation Iraqi Freedom at FOB Kalsu. He was also stationed with A Trp., 1/11th ACR, Ft. Irwin California, with A Company, 4-17 Infantry Battalion, 1st BCT, 1st AD, Ft. Bliss, Texas, and at Camp Casey, South Korea. Jeremy received an Iraqi Campaign Medal with Two Campaign Stars, Army Commendation Medal, Two Army Achievement Medals, Meritorious Unit Commendation, Two Army Good Conduct Medals, National Defense Service Medal, and Global War on Terrorism Service Medal, Korea Defense Service Medal, Non-Commissioned Officer Professional Service Ribbon, Army Service Ribbon, Two Overseas Service Ribbons, Driver and Mechanic Badge with Driver-Wheeled Vehicle(s). After discharge from the Army, he returned home to his family in Rancho Cucamonga. Jeremy married Alexandra on December 31, 2010, and they had 2 children together. He worked full time and attended Universal Technical Institute in Rancho Cucamonga full time, in order to make a better life for his family. After graduation, he became an Auto Mechanic and worked as smog technician. He also worked as an Inspections Coordinator for ION Electric. He returned to UTI completing a course in Welding. After graduation, he worked full time as a Welder for a Waste Management Company. He then returned to work at ION Electric as an Inspections Coordinator, doing what he actually loved. He had found the trade he wished to make his career. At the time of his death, he was enrolled at Southern California Institute of Technology in Anaheim to become an electrician. Jeremy was loved by so many. He was a generous and patriotic man. He was also an organ donor. He loved his children, family and friends. We honor him for his service to our country and asked that you honor his life by keeping his memory alive. *** Riverside National Cemetery has a limit on flower arrangements. In Lieu of Flowers, donations may be made to his Daughters’ College Funds. Checks may be made to Christina Hargett with specific note on Memo Line "For Sophia & Brianna Sornson" ** All funds will be deposited into their already established savings accounts.

The family of Jeremy Sornson created this Life Tributes page to make it easy to share your memories.

Send flowers to the Sornson family.