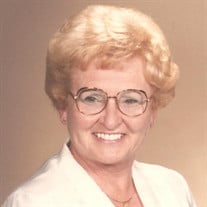 Early in the morning of 23 May and after a short period of decline, Jean P. Davis went to be with the Lord. She joins her husband Bob, her daughter Becki, and her son Bert who all predeceased her. Jean was born Elsie Jean Phillips to Arthur and Clara Phillips on January 5, 1923 in the steel country of Pennsylvania. She spent her formative years in the vicinity of Coraopolis, PA, where she met, fell in love with, and married Robert Vale Davis on May 30, 1944. Bob served in the Merchant Marines during World War II. His service led the young couple to Southern California, where they were soon blessed with three children - Roberta (Robbie), born in 1946, Rebecca (Becki), born in 1949, and Robert Jr (Bert), born in 1950. The young family purchased their home on Elm Avenue near the orange groves of San Bernardino in 1953. It was there that Jean would call home for the next 65 years. Those years saw Jean serving for 29 years in a number of capacities in the San Bernardino Unified School District, culminating in a stretch as the personal secretary for the long-time principal of Cajon High School, Mr. Dick Bristow. She retired from this position and settled into a well-earned retirement on Elm Avenue. She welcomed her mother Elsie into that home for a number of years until Elsie passed away in 1988. She also welcomed the odd cat as well. From that point on until February of 2018, Jean served as a bulwark of her neighborhood and church. A woman of strong Christian faith, Jean was a regular congregant at Calvary Chapel on Baseline in San Bernardino, and professed that faith with strength and depth whenever given the opportunity. Jean’s biggest challenge began on 27 February 2018 when she suffered an unfortunate fall at her home, breaking her hip. After a period of recuperation, Jean went to live at the Brightwater Senior Assisted Living facility in Highland. After settling in, Jean became the “Go to” person there, welcoming new residents and aiding them in their own transition. At Brightwater, Jean was universally respected and loved, for her warmth, for her cheer, for her sense of humor, for her deep faith, and for the respect she paid to all to whom she came in contact. We miss you Jean, but know that you are in God’s loving embrace, walking with Jesus. And knowing you, we will have a place prepared for us when we come to join you. And you made the beds.

Early in the morning of 23 May and after a short period of decline, Jean P. Davis went to be with the Lord. She joins her husband Bob, her daughter Becki, and her son Bert who all predeceased her. Jean was born Elsie Jean Phillips to Arthur... View Obituary & Service Information

The family of Jean Phillips Davis created this Life Tributes page to make it easy to share your memories.

Early in the morning of 23 May and after a short period of decline,...

Send flowers to the Davis family.