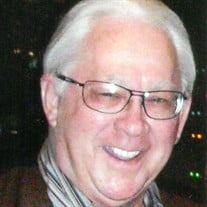 James Robert Wright, 77, of St. George, Utah (formerly of Mansfield, OH and San Bernardino, CA) passed away from heart failure on March 16, 2017 in Salt Lake City, Utah. Born in Wilkinsburg, Pennsylvania, he was the son of Raymond W. and Opal M. Wright. Jim served in the US Navy from 1958 to 1962, stationed in many places including Pensacola, FL and Quonset Point, RI and was assigned to the USS Lake Champlain aircraft carrier. He was an insurance broker for over 50 years. He was a former member of the Kiwanis Club of San Bernardino and Arrowhead Country Club. He was a golfer, boat enthusiast and loved NASCAR and Formula One races. He loved to travel, having been to Australia, China, England, New Zealand, Italy, Scotland and Ireland as well as many states within the USA. He was preceded in death by his wife of 43 years, Markne’ Reeve Wright. He is survived by his son Todd Wright (Liz), daughter Terri Carlos (Jorge), three grandchildren Steven Wright (Yvonne), Elizabeth Carlos and Devon Wright and sister, Patricia Scudder. He would have been a great grandfather in May 2017. Memorial services will be held on Tuesday, June 13, 2017 at 11:00 am at Riverside National Cemetery, Staging Area #1. The family requests that in lieu of flowers, donations be made in Jim’s memory to Intermountain Research and Medical Foundation, 5121 S. Cottonwood St., Salt Lake City, UT 84157. Please note “In Memory of Jim Wright/LVAD Research”.

The family of Mr James R. Wright created this Life Tributes page to make it easy to share your memories.

Send flowers to the Wright family.