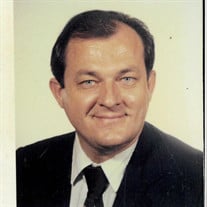 James E. Simmons, 79, went home to be with the Lord on July 15, 2020 in San Bernardino, California. Jim was born in Belle West Virginia to Clover and Margaret Simmons. He was the second of five children including his older brother Ken, younger brothers Ray and John and his sister Marlene. The family later moved and he was raised in Roseville, Ohio. Jim attended Roseville High School leaving in the eleventh grade to join the United States Marine Corps. While stationed in Twenty-Nine Palms during his final year in the Corps, he met the love of his life Betty Lee Buskirk, and they were married soon after. Once Jim was honorably discharged the newlyweds moved to San Bernardino where they made their home. Jim attended Valley College where he obtained his AA Degree. He worked in several different position before becoming a salesman for Foreman & Clark where he was awarded Salesman of the Year. After approximately five years, Jim moved into Insurance Sales and this became his lifelong career. He worked for National Life Insurance where he rose through the ranks and finally became a broker for several insurance companies. Jim and Betty were blessed with four children, Teresa, Phillip, Paul and Rebekah. When his children were younger, Jim was active in supporting them in their sports activities even becoming the announcer for baseball at Fiscalini Field in San Bernardino. Jim was a people person and was beloved by everyone he met. He was recognized by his distinctive, strong voice and his infectious laugh. He loved to garden and grew the best vegetables for his family and friends. He was a devout Christian and a member of Immanuel Baptist Church for many years. More recently he was a member of Cornerstone Bible Baptist Church in Redlands. Jim is survived by Betty, his wife of 58 years. His children Teresa (David) Thorne of San Bernardino, Phillip Simmons of San Bernardino, Paul Simmons of San Bernardino and Rebekah (JK) Simmons of Beaumont. He is also survived by his grandchildren, Kaley (Ryan) Arrieta of Redlands, Jeremy Biggs of San Bernardino, Jessie Hubbs of Redlands and his great granddaughter Scarlette Biggs. The family all looks forward to a reunion with Jim in heaven. He will also be missed by his church family. As a Marine veteran, Jim will be laid to rest at Riverside National Cemetery in a private service.

James E. Simmons, 79, went home to be with the Lord on July 15, 2020 in San Bernardino, California. Jim was born in Belle West Virginia to Clover and Margaret Simmons. He was the second of five children including his older brother Ken, younger... View Obituary & Service Information

The family of Mr James E. Simmons created this Life Tributes page to make it easy to share your memories.

Send flowers to the Simmons family.