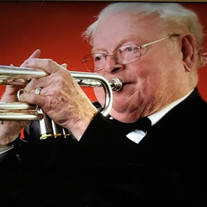 James Joseph Ogden, 83, peacefully fell asleep in Jesus arms on August 31, 2018 in San Bernardino. We say farewell until we see you again in heaven and we miss you more than words can say. He was a loving husband to his honey, Dee, and a loving father to his daughter, his little flower Theresa and his loyal son Tony. He was a devoted man of God always worshipping with an instrument in his hands. Now we honor his life and remember his life time experiences. Jimmy grew up in Long Beach, CA, and went through all the school music programs. In 4th grade he chose trumpet, and in 6th grade started playing solos. He continued on with trumpet and graduated from Cal State Long Beach with a Bachelor of Music and Business. He became a professional musician playing all the brass instruments. As an accomplished musician he played in the US Marine Corp Band, the Long Beach Municipal Band and community bands. He spent 14 yrs performing in Big Band Ballrooms in Long Beach and Catalina. He continued on playing in famous Big Bands - Henry Mancini Orchestra, Orrin Tucker Orchestra, Harry James Orchestra, Frank Scott Orchestra and others. He was asked to play tuba in the Disneyland Dixieland Band and at Disney Studios. He also enjoyed strolling in Dixie Bands at Knotts Berry Farm, Laughlin and many other venues including Lake Arrowhead Village, Octoberfests, German and polka bands. He played in many musicals including: Annie,Sound of Music, Oklahoma, Cinderella, Peter Pan, Big River, Wizard of Oz and Carousel [where he met his wife of 61 yrs]. After numerous country club performances he became a member of the Coachella Valley Symphony and the Desert Chamber Orchestra and the Running Springs Woodwind Quintet and recently the Empire Wind Ensemble and the 4th of July Band. A few years ago he played for the Jimmy Kimmel Show and Baby Daddy TV series. He was a Lifetime member of the American Federation of Musicians and enjoyed a brilliant career for the glory of God. He loved: 60 years of playing music for our Lord Jesus Christ - 40 years of composing Christian music - 10 years of church choir directing and vocalist - 30 years playing various instruments on worship teams 13 years of volunteer teaching brass instruments in the Rim School music programs Jimmy loved unconditionally his family and friends, his fur babies and his God. We know he is playing his tuba or trumpet in the Angels Brass Choir in heaven, and is incredibly missed by all who knew him. Services will be held on September 12 at Our Lady of the Lake Catholic Church in Lake Arrowhead. Visitation at noon and Funeral Mass at 1pm. Everyone is invited to celebrate with us in either service with prayer and music. A Memorial Service will be held on September 30 at Running Springs Assembly of God at 10am.

James Joseph Ogden, 83, peacefully fell asleep in Jesus arms on August 31, 2018 in San Bernardino. We say farewell until we see you again in heaven and we miss you more than words can say. He was a loving husband to his honey, Dee, and a loving father... View Obituary & Service Information

The family of James J. Ogden created this Life Tributes page to make it easy to share your memories.

Send flowers to the Ogden family.