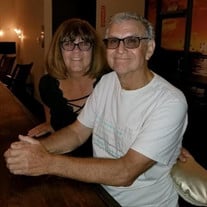 James Patrick McCambridge passed away peacefully at home on Friday, January 15, 2021 in San Bernardino, California. He is survived by his loving wife, Cheryl, with whom he enjoyed 45 years of marriage. He is also survived by his son, Jimmy, daughter-in-law, Stacia, daughter, Kelly, son-in-law, Bobby, brother, Paul, grandsons, Ty, Owen and Greyson, and greatgranddaughter, Kensley. Patrick was born on March 17, 1952 in San Bernardino, CA to James and Mary McCambridge. Being part of a military family, he spent his childhood in Hawaii, Ohio, and California. He graduated from San Bernardino High School in 1970 and joined the United States Air Force in 1971, serving until 1975. He ended his military career as a Staff Sargeant. During his time in the Air Force, Patrick married his high-school sweetheart, Cheryl Paeth, on February 8, 1975, in San Jose, CA. The couple relocated to their hometown of San Bernardino, CA. Patrick worked as a Millwright from 1975 until 1986, when he began his lengthy career with the Metropolitan Water District. He worked for MWD as a Hydro Electric Technician until he retired in 2013. He loved his work and his colleagues, but he always said that his best decision ever was retirement. Once retired, Patrick enjoyed lots of quality time with his grandchildren, attending school functions and sporting events. He enjoyed riding his Harley and in later years enjoyed camping with Cheryl in their RV with their Labs, Maggie and Coco. Among his favorite places to spend time were Havasu, Mammoth, Rincon Beach, and the yearly trip with friends to Pechanga. Patrick fought a long and hard battle with cancer during which he continuously amazed his family, friends, and doctors with his strong will to live. The grace with which he lived out his journey was truly remarkable. His kindness, strength, and sense of humor will be deeply missed by all who knew him. In lieu of flowers please consider making a donation to Wounded Warriors or to you favorite charity in James' name.

James Patrick McCambridge passed away peacefully at home on Friday, January 15, 2021 in San Bernardino, California. He is survived by his loving wife, Cheryl, with whom he enjoyed 45 years of marriage. He is also survived by his son, Jimmy,... View Obituary & Service Information

The family of James Patrick McCambridge created this Life Tributes page to make it easy to share your memories.

James Patrick McCambridge passed away peacefully at home on Friday,...

Send flowers to the McCambridge family.