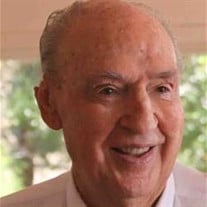 James Warren (“Coach”) Hackleman passed away peacefully at Plymouth Village in Redlands, California on September 9, 2018 at the age of 96. He was born on October 14, 1921 in Huntsville, Arkansas and when he was 5 years old moved with his parents Maggie and William to Exeter in central California. He excelled in sports, especially basketball, and was the president of his graduating class at Exeter Union High School in 1939. He next attended nearby Visalia Community College. In 1941 he transferred to the University of Redlands. In response to the outbreak of World War II, he enlisted in the United States Marine Corps in 1942 and was enrolled in the V-12 officer program, receiving military training while still attending classes at the University. In 1943 he transferred to Quantico, Virginia and Parris Island, South Carolina for additional training where he received his commission as a Second Lieutenant. In 1944 Lt. Hackleman was sent to the South Pacific where in March, 1945 he was assigned command of a platoon in Company B, 1st Battalion, 7th Marines, First Marine Division. On April 1,1945 he landed on the beaches in the invasion of Okinawa. On May 10,1945 he led his platoon in an assault on the heights at Dakeshi Ridge. Lt. Hackleman was awarded the Purple Heart and the Silver Star for conspicuous gallantry in that action. After the war, he returned to the University of Redlands where he was active in sports, becoming the captain of the basketball team. There he met his wife-to-be, Patricia Christensen, whom he married in 1947. Upon graduation he became a teacher and accepted his first job at Barstow Union High School. In 1949 he was hired by San Bernardino City Schools where he taught at Sturges and Arrowview Junior High School before becoming a coach and physical education teacher at San Bernardino High School. His career was interrupted when he was called back in to the Marine Corps during the Korean War. Promoted to Captain, he trained Marines at Camp Pendleton, California from 1951-52. At SBHS he coached championship teams in basketball and football and was ultimately offered the varsity basketball coaching position at Pacific High School by Principal “Doc” Bailey in 1965. There he led the Pacific Pirates to 5 championships in the Citrus Belt League. He retired from coaching in 1978 and from teaching in 1982. He continued with substitute teaching for 2 years in special education. In retirement, he and his wife traveled and enjoyed the company of many wonderful friends. His wife Patricia passed away in 2011 and has now been reunited with him. They had three sons, James (Lori), Chris (Shirley), and David. With our combined families they delighted in grandchildren Jaime(Ben), Brad, Cory(Cindy), Niki, and Patrick(Christine); and great-grandchildren Jack, Camryn, Clay, Sarah, Hayden, Cristal, Austin, Bodhi and Karsen. On Friday, October 5, 2018 there will be an inurnment ceremony at the Riverside National Cemetery, 22495 Van Buren Blvd., Riverside at 10:00 AM followed by services and a reception at Bobbitt Memorial Chapel, 1299 E. Highland Ave., San Bernardino at 12:30 PM.

James Warren (&#8220;Coach&#8221;) Hackleman passed away peacefully at Plymouth Village in Redlands, California on September 9, 2018 at the age of 96. He was born on October 14, 1921 in Huntsville, Arkansas and when he was 5 years old moved... View Obituary & Service Information

The family of James Warren Hackleman created this Life Tributes page to make it easy to share your memories.

Send flowers to the Hackleman family.