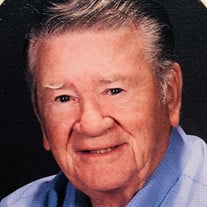 James F. Ferguson, “Jim” 86, passed away on Tuesday June 12, 2018, at Silverado Sierra Vista in Azusa. Jim and his wife Marg, raised their family in Rialto, CA, where they lived for 40 years. They moved to Cherry Valley in 2001. Jim grew up in the Ventura, CA area, after migrating from Oklahoma as a child. He served in the U.S. Navy during the Korean War era, and was stationed in San Diego. After graduating from U.C.L.A. with his degree in Chemistry, he was hired by Kaiser Steel Corporation in Fontana, CA, where he worked as a metallurgist for over 25 years. After the Kaiser plant closed, he went to work for California Steel, where he worked as Chief Chemist for 10 years. Jim was a devoted husband, father, grandfather, and friend. He cherished the times he had with those he loved. Jim’s wife Marg passed away in 2008 after 52 years of marriage. He is survived by their three children: Mandy Mancini of Tucson, AZ; Jim (Barbara) Ferguson of San Bernardino, CA; and Jon Ferguson (Casey) of Rancho Cucamonga, CA. He also leaves behind his seven beloved grandchildren: Sam Ferguson (Yesenia) of San Bernardino, CA; Kelsey (Andrew) Leal of Anaheim, CA; Katie (Ray) Lobato of Tucson, AZ; Hannah (Shane) McCoy of Temecula, CA; Sarah Mancini of Tucson, AZ; Delaney Ferguson of Rancho Cucamonga, CA; and Cole Ferguson of Corona, CA. He is further survived by 5 great grandchildren, his brother Kenneth (Carol) of Ventura, CA, and many other family members. In his years as a widower, Jim developed Alzheimer’s-related dementia. Though sadly robbed of his great mental faculties and life’s memories, he never lost his wit and kindness towards others. He will be missed by all who knew and loved him. Services will be held at Bobbitt Memorial Chapel on Saturday, June 23, 2018. A visitation will begin at 10:00 AM with a chapel service starting at 11:00 AM. Immediately following will be a graveside service at San Gorgonio Memorial Park in Banning.

The family of James F. "Jim" Ferguson created this Life Tributes page to make it easy to share your memories.

Send flowers to the Ferguson family.