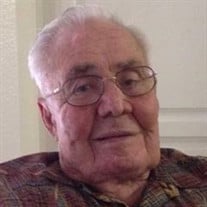 JACK EDWARD ACKER February 29, 1924 - February 14, 2020 Jack E. Acker, 95, beloved husband, father, grandfather, friend of many, passed away February 14, 2020 at his home in Highland, California, with his family by his side. Born in Allentown, Pennsylvania, to Harold and Katherine Acker. The family moved to Southern California in 1939, where Jack graduated from Hollywood High School in 1942. Jack enlisted into the U.S. Army Air Force in 1943. He was commissioned as a 2nd Lt and became a navigator in 1944. He was assigned to the B-29 group that was ready for overseas duty. He spent 9 months in Guam. He flew 23 combat missions in the Pacific theatre, earning the Distinguished Flying Cross Medal. He also spent 2 days on a life raft in the middle of the Pacific Ocean when his B-29 ditched. In 1945 he was discharged from the service and attended UCLA graduating with a BA in Economics in 1947. On June 26, 1950 he was recalled to active duty and assigned to the 452nd Bombardment Group in Miho, Japan. He flew over 60 missions in the Korean War earning Air Medal with clusters. Jack was assigned to Mather AFB and became a ground school instructor in the “K” system of radar which was being used in the B-36, B-47, and the new, at the time, B-52 aircraft. He served time in Waco and San Antonio, Texas. From April 1961-June 1964, he was a MAAG advisor to the Republic of China in Taiwan. He then went to Harvard University, earning his MBA in June1966. Jack served at Scott AFB 1966-1969 as the Director of Personnel. He then was assigned to Norton AFB as Director of Personnel for the 63rd Military Air Lift Wing. Jack retired as a Colonel in 1974, after 32 years of service. In 1979 Jack went to work for the San Bernardino County Department of Public Social Services as an educator, in the Staff Development Unit, teaching leadership. Jack retired in 1990, and later in 1993 worked an additional 12 years for the County. He taught Business and Leadership Classes at Crafton Community College and UC Riverside. He also was a Consultant to Fleetwood Company and traveled to U.S. plants teaching leadership to the managers. He continued to be active by participating in volunteer work for the San Bernardino County Museum and the Registrar of Voters. He was a long -time member of MOAA, Orange Empire Chapter. Jack is survived by his wife Chris of 27 years, his son Michael Acker (Rose Marie) of Illinois, grandchildren Heather Jacobsen (Eric) of Illinois, Michael Acker Jr (Eliana) of Washington, great grandchildren Sam, Sydney, and Elliot Jacobsen of Illinois, his brother Lee Acker (Linda) of Kentucky and his cousin Ronald Hanstein (Karyn) of California. A celebration of life will be held on March 21, 2020, from 11:00 am to 1:00 pm at the Mountain Shadows Mobile Home Community Clubhouse, 4040 E. Piedmont Dr, Highland, CA 92346. A memorial service will take place at the Riverside National Cemetery, March 23, 2020 at 2:30. Memorial donations in memory of Jack may be sent to the Braille Institute.

The family of Jack Edward Acker created this Life Tributes page to make it easy to share your memories.

Send flowers to the Acker family.